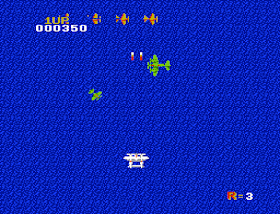 Genre: Action
Perspective: Top-down
Visual: 2D scrolling
Gameplay: Arcade, Shooter
Vehicular: Flight / Aviation
Setting: World War II
Narrative: War
Published by: Capcom U.S.A.
Developed by: Capcom Co.
Released: 1986
Platform: Nintendo (NES)
The plot in the game is this. In the courtyard of 1942, the Second World War is in full swing. America has relatively recently begun military operations, which mostly take place in the air above the Pacific Ocean, and the main enemy is the storm troopers that flew from the Land of the Rising Sun.
"1942" is a classic scrolling shooter with a top view, in which the main character is a pilot of the Super Ace combat aircraft. We must finish 32 difficult missions, faced face to face with insidious enemy fighters. Along the way, we will have to collect all sorts of bonuses, shoot the ill-fated kamikaze and, in the end, destroy all Japanese airbases. In the game there is a mode of two players, but you can play it only in turn. The plot is simple and rather banal, but the game has a fairly addictive gameplay and is rightfully considered one of the best shmups genre for the NES console.

If your plane is knocked down by a squadron of yellow enemy planes, take what was left in place of the last downed aircraft:
- Increase the guns by half;
- the disappearance of all enemy aircraft on the screen;
- help two small airplanes.
Remember that in the place where your prize lies, the enemy concentrates the fire. Therefore, it is not always useful to be greedy, sometimes it is better to refuse the prize.
‹
›
Home
View web version