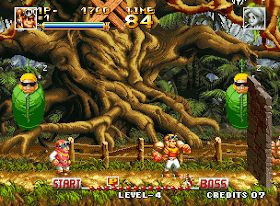 Genre: Action
Perspective: Side view
Visual: 2D scrolling
Gameplay: Platform
Published by: SNK of America
Developed by: SNK Corporation
Released: 1994
Platform: Neo-Geo
The game has been re-released later in the compilation SNK Arcade Classics Vol. 1, which went on sale on May 1, 2008.
This title pertecene to the group of games of Neo Geo baptized like "The 100 Megashock", due to the size of Megabits that has this cartridge (110 megabits), This is more than double of the greater cartridge of the SNES and on the triple of the cartridges of Sega Genesis, of course that over the years appeared cartridges with a lot more capacity. This game could be called a precursor to the first Metal Slug, due to the use of robotic vehicles, which are very similar to Slugs.

Top Hunter saves a game system very similar to previous games that have been released for Neo-Geo, as Spinmaster. Of course it adds powerful innovations such as incorporating two game plans, or the inclusion of powerful enemies.
The game is divided into four planets, and can be selected in the order the player wants: Forest, Ice, Wind, and Fire. Depending on which stage is chosen first, the stage design will change. For example, if the player chooses the Ice World before the Forest World, the Forest World principle design will be different. After completing the 4 worlds, the player will face the final stage, where they have to fight again with the previous four bosses and battle the game's antagonist, Captain Klapton.

The best galactic bounty hunters in the galaxy, Roddy and Cathy, are sent to arrest a colony of Galactic Pirates called "The Klaptons," who stalk and loot the cosmos. Four high members of The Klaptons have taken control of the four elemental planets. Due to this, a great reward has been offered for the captures of these villains: Sly, Misty, Mr. Bigman and Dr. Burn .. The Top Hunter battles with the Klaptons forces and destroys the bosses, but all of them escape In the Last Chase, Roddy and Cathy will have to fight Captain Klapton's ship, defeat the four bosses again and liquidate the captain once and for all.

He usually received favorable reviews. Famicom Tsūshin scored the Neo-Geo version with a 24 out of 40.1 The four editors of the Electronic Gaming Monthly magazine gave it a 7 out of a half of 10. Two of the reviewers criticized that "the difficulty, even in the most difficult mode being too easy, "leaving players to breeze through the game very quickly, and thus making it a poor value given the high price of Neo Geo cartridges. Even so, all four felt that the game was very enjoyable for its brief length due to its numerous techniques, outstanding graphics, strange bosses, orchestral music, and ability to move between the foreground and background. n ° 31 punctuated the game with a note of 91 of a maximum of 100, emphasizing the graphic work especially with the heads of level and the two planes that has the game.
‹
›
Home
View web version