The Legend of Zelda: Ocarina of Time (N64) 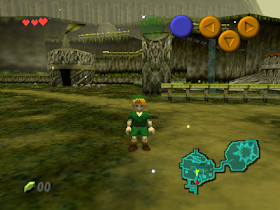 Genre: Action
Perspective: 1st-person, Behind view
Gameplay: Metroidvania, Puzzle elements
Interface: Direct control
Setting: Fantasy, Medieval
Published by: Nintendo of America Inc.
Developed by: Nintendo EAD
Released: 1998
Platform: Nintendo 64 (N64)
Another part of the popular series The Legend of Zelda. It was followed by the sequel The Legend of Zelda: Majoras Mask.Ocarina of Time is the fifth game of the series, however, in the chronology of the events described, it is a prequel to the four games that were released earlier.The game takes place in the kingdom of Khairul. The main character of the game Link goes on a journey to stop Ganondorf (the main enemy of Princess Zelda and the main antagonist of the games of the series, in the first games it was called Ganon). Gänondorf, in an attempt to capture Hayrul, seeks to acquire an artifact known as Triforce, which is capable of fulfilling the desires of the one who owns it. To stop him, Link travels in time using a musical instrument, The Ocarina of Time.
‹
›
Home
View web version