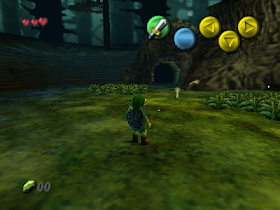 Genre: Action
Perspective: 1st-person, Behind view
Gameplay: Metroidvania, Puzzle-solving
Interface: Direct control
Setting: Fantasy
Published by: Nintendo of America
Developed by: Nintendo EAD
Released: 2000
Platform: Nintendo 64 (N64)
If the game The Legend of Zelda: Ocarina of Time can be called epic, then The Legend of Zelda: Majora's Mask deserves the title epic doubly.
This time, Link, the hero of Khairul, will travel through time to unravel the gloomy secret of the mask of Majora.
This is a breathtaking continuation of The Legend of Zelda: Ocarina of Time is built on an idea that shakes the usual foundations of most games. The link is to repeatedly experience the same three days and three nights, exploring the game world and building relationships with the characters. This time it's the plot that will become the driving force behind The Legend of Zelda: Majora's Mask. Storylines will loop like living beings, revealing more and more details about the Term.
In this mysterious adventure, Link will act as a detective, and he will have to gather information about both familiar and completely new characters. At first glance it may seem that The Legend of Zelda: Majora's Mask is unusually gloomy and dark, but in fact such a tense atmosphere creates fear of the unknown. As Link begins to understand what is happening around, the world becomes less frightening.
The story begins just three months after the victory of Link over Ganondorf in The Legend of Zelda: Ocarina of Time. The weakened Link rides on Epone through the dense fog in search of his faithful friend Navi. Suddenly, from the fog, two naughty fairies Tatl and Tael appear, scare the faithful horse Link. Link falls and loses consciousness, and from the fog there appears the Cherepish. This villain in a mask steals from Link to Okarina and immediately climbs into the saddle of Epona. Link rushes in pursuit, not suspecting that he is pursuing not just the Cherepish, but the one who possesses the mystical forces of the mask of Maggiore. As a result, Link follows the Tortoise into a portal that leads to a parallel universe.
The new kingdom is called the Term. Although it is in many respects similar to Hayrul, this unique world leaves a strange feeling for Link. Soon, Link finds out that he arrived at the term at the most unfavorable moment. And it's not just the insidious Tortoise, obsessed with the dark forces of the mask of Maggiore. Three days later, the moon itself will fall from heaven and destroy all life. Link understands that it was not accidental. He must unravel the mystery of the mask of Magiora and save the Term from destruction. And all this he will only have three days.
Masks play a crucial role in this adventure. At the very beginning of the game, Link will meet a wandering merchant from the store of happy masks. At first it is difficult to say whether this roguish character is on the evil side or on the side of good, but he claims to be the rightful owner of the mask of Maggiore. It is this wandering merchant who takes Lynka to his adventures for exactly three days, and it will be three days later that the inevitable collision with the Moon will occur. The merchant gives Link his first mask - the Deco mask. Only in this mask Link can communicate with the Deco tribe, who would not pay attention to Link in his human form.
After wearing the Goron mask, Link is moved to the body of the fallen Goron named Darmani. Goron-Link is one of the most unusual Gorons living in the Terme. In the guise of Darmani, Link has a crushing blow with his fist and the ability to roll at high speed. In Zora's mask, the Link instantly gets the ability to swim as fast as a dolphin. To solve many puzzles in The Legend of Zelda: Majora's Mask The link is to change the appearance using the above masks. Also he will need additional masks, which in the game there are more than 20 pieces. Some masks will help Link to communicate with certain characters, others will give him special skills, for example, to run fast.
‹
›
Home
View web version