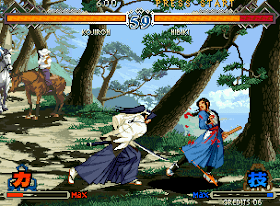 It takes place six months after the events of The Last Blade, in 1864, still in full Bakumatsu. Kagami Shinnosuke the misanthrope has finally achieved his evil plan to open the door of hell to purify the world of humanity. Although defeated by Kaede and his invocation of Seiryu, he has nevertheless succeeded in his plan: the door of hell is still open and two evil spirits have entered the earth. Heroes must now not only find how to close the cursed portal but also defeat these two spirits.

It resumes globally that of the first episode: four buttons (two to attack the sword, one for kicks, one to counter) and two game modes (power or speed). Only a few small changes have been made to the gameplay, mainly at the level of the mug which is now by combining the two buttons and against foot.

With The King of Fighters '98: The Slugfest and Garou: Mark of the Wolves, The Last Blade 2 is the game that corresponds to the creative peak of SNK, the Neo-Geo is technically pushed to its limits, the game is beautiful and has a very elaborate zoom system. The gameplay benefits fully from the accumulated experience of this fighting game specialist, the game is still played and tournaments continue to be held in Japan.