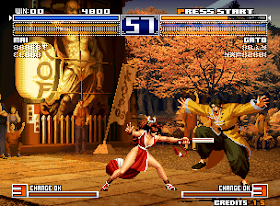 Genre: Action
Perspective: Side view
Visual: 2D scrolling
Art: Anime / Manga
Gameplay: Arcade, Fighting, Martial Arts
Published by: SNK Playmore USA Corp
Developed by: SNK Playmore Corporation
Released: 2003
Platform: Neo-Geo
The game features the gameplay of its previous versions: 8-way joystick and 4 attack buttons. As always with the evasive (buttons A and B together) and counterattack (buttons C and D together). At the beginning of a battle, both teams will already have 3 full power-stocks. Two new features of the game are the Tag Battle system and the choice of a leader for the team.

KoF 2003 is the first game in the series to use a Tag Battle system that allows the player to switch between the members of his team during the battle. Some say it's a Marvel Vs. Capcom of SNK in the form of KoF. To switch between the 3 team members just press the A + C or B + D buttons. When done, the active character will perform a Taunt-like animation (also known as "taunt animation") and switch places with his partner. There is also the possibility of using a counterattack and being able to change characters at the same time. The command "half-moon forward + A + C or B + D" is executed and the character will perform a counterattack. He quickly leaves the screen and his partner comes to his already attacking place. This tactic is used to inflict more damage on the opponent and increase the number of combos.

In the team selection screen, the first member to be chosen will be set as team leader. This is the only member of the team that can perform level 2 special blows (or HSDM - Hidden Super Desesperation Move).Note: Most character HSDMs run with the same sequence of moves as one of their Super Desesperation Move (SDM), but with 2 buttons instead of one.

Rugal was dead, Goenitz was also dead, Orochi was sealed, NESTS was over and all the fighters could have another year of rest, however they had to give up the rest and once again hone their techniques once again, as the tournament started again in the year of 2003. New trios were formed, new fighters, among them a fighter who had his memory erased, Cat, a fighter of all good, Tizoc, a user of legal and illegal weapons, Malin, the hero of saga NESTS K ' the newest ninja of the Hizoku Clan, Duo Lon, the creator of his unique and devastating boxing style, Shen Woo, and a mysterious and incredible power fighter, Ash Crimson.The three-time champion K 'participates in the tournament against his will, as he was appointed by the old Chin Gensai to participate, as he senses a mysterious evil force behind that KOF. K 'does not believe, changes his mind, when he sees the image of a huge and malignant being. After this K 'accepts to participate in the tournament once more to investigate this.Before the fights, an interesting figure is revealed, it was Kusanagi, who is surpassed by K '.The tournament begins, and the team formed by Ash Crimson, the new Team of Heroes, shows what has come, reaching the semi-finals. While the veterans Kyo and Iori watch the fight a boy with an incredible resemblance to the four-time champion Kyo approaches and introduces himself as Kusanagi and begins to attack Kyo and Iori, but Kusanagi is easily defeated, and Kyo and Iori wonder who would have been the the K 'team and the Ikari Warriors Team are preparing for the final fight. Meanwhile, Kyo and Iori are attacked by Chizuru, without knowing the reasons, both had to fight.The Ikari Warriors Team participated in the tournament in search of the origins of a mysterious blimp. They had identified as Sky Noah and were in the tournament to investigate their crew. During the final, Leona had mysteriously experimented with the Blood Revolt and maddened and even attacked his teammates Ralf and Clark in the tournament final. Fortunately, they dominate it and decide to take it back to the Ikari Warriors headquarters to receive medical care.Even though they were the official champions of the tournament due to the incident, the Ikari Warriors decide to deliver the mission to K 'to investigate the aircraft. K 'goes up to the mysterious Sky Noah aircraft for the final fight against the mysterious hosts of the tournament.
Duolon realizes that Ron, a traitor to his clan, is watching and goes after him, Shen Woo is angry, wanting to get stronger. As Ash calculates some unknown plane and disappears.Not believing what they saw, a huge picture of Rugal. Adel and Rose were brothers, the children of Rugal, and were willing to show that the legacy of the family was still standing. Attacking violently the champions.After much battle, K 'manages to overcome Adel, while Rose does not accept it. Adel explains that a defeat, it is a defeat .. it would not be worth continuing to fight until you win.Chizuru and Maki are defeated by Kyo and Iori. While a mysterious figure shows up that she was manipulating Chizuru, it was Botan ... She says that Chizuru and Maki were mere puppets used to break Orochi's seal again, and that they were no longer useful. Kyo asks where she came from, and Botan replies that she is from a land far away, and suddenly a frightening figure appears. His body was all black, apparently formed of stones and rocks, and was called Mukai, and says that they will transform the world and feed Orochi's power. Kyo and Iori face Mukai, but they were weakened after the fight against Chizuru ... At that moment, Ash is observing every detail.Without further strength, Kyo and Iori only see a mysterious figure appear in front of him ... it was K ', who was utterly dejected and starts a confrontation against Mukai when he realizes that that was the being of his vision.Mukai appears in the present era wanting revenge against Kyo Kusanagi by the defeat of Orochi, in the events of KOF occurred in 1997, possibly he is of the family of Orochi, since it continues the mission of Orochi.After much combat, K 'is forced to assimilate the mysterious power of the Great Snake that promises to make him win. Then recovered, K 'comes out victorious, but surprised that Mukai has not been eliminated.K ', Kyo and Iori watch a huge hand come up and take Mukai and Botan to an unknown place where other unknown figures appear. Mukai says that they need to prepare for what is to come, for the world will be ready for the new Age.Exhausted, K 'falls unconscious. Chizuru then explains that with the seal broken and after the fight, K 'was serving to be Orochi's new host. But before she can do anything to stop it, she is attacked by Ash who steals her treasure, the Yata mirror, and throws it over Kyo.Kyo asks why, while Iori tries to attack Ash, realizing that he has been able to assimilate the power of Chizuru ... Ash promises that Iori will be next and disappears.Irritated, Kyo wonders what will happen ... "Mukai, Orochi, Ash ..." As the powerful Kusanagi flames on his arm burn again.Far away, K 'meets up with his team and wonders if this was a dream, because he did not want to believe in the future that the world would have. While Whip was calling Diana for information about how Kula was ... K 'remembers Mukai's words, getting more irritated and losing control of his flames.Maxima asks if it was a problem with the glove, but K 'says that the problem lay in that new mysterious power. Going away without looking back.The Seal of Orochi was once more broken, to bring again disgrace and take away the hopes of the people.
‹
›
Home
View web version