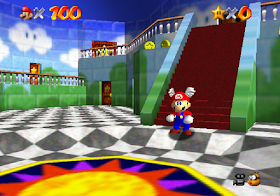 Genre: Action
Perspective: 3rd-person
Gameplay: Platform
Setting: Fantasy
Published by: Nintendo of America Inc.
Developed by: Nintendo EAD
Released: 1996
Platforms: Nintendo 64 (N64), Nintendo DS (NDS)
Here it is - the main game on the Nintendo 64! I remember how stunned everyone was after the first demonstration of this game. Mario 64 became a model of 3D walkers. Nintendo did an excellent job. Many people bought Nintendo 64 because of Mario 64! The game from the category "Must walkthrough". Later the game was reissued on the Nintendo DS with all levels preserved and almost the same graphics (there was no more than anti-aliasing, however, this smoothing was the business card of Nintendo 64)

Once Princess Peach called Mario to her castle with a proposal to eat cake and drink tea. Mario comes to the castle and hears Bowser's loud laughter. Mario meets one of the Toads and tells him that Bowser kidnapped the princess and the castle stars to create his world in paintings and walls, and does not let anyone go so that they do not call for help. Mario goes to the drawings and finds all 120 stars. After the final battle with the Boss, Princess Peach thanks Mario, and they go to tea together.

As already mentioned, Mario travels through an empty castle and jumps into the drawings, after which the level begins. At first, one level is available, in which it is necessary to collect several stars. Finding all the figures is a very time consuming job. After a set of a certain number of stars, new levels appear and new doors will be available. There are also locked doors, behind which will be battles with Bowser. In the battles with him you have to grab his tail and throw it at the bombs. If Mario lost all his life points, he flies out of the level. Mario in the game can do a huge number of tricks and movements, there are bonuses in the form of caps, with which Mario can fly, become invisible, metallic, etc. After performing certain actions at the level, certain bonuses will appear in the form of additional blocks, guns, which help Mario can get into secret places, etc. Points of life are called energy (Power). When you take damage, it decreases. It also decreases if you stay under water for a long time. You can repair it by collecting coins with the image of a star. Collecting green mushrooms, you can get an extra life (as it was in Super Mario Bros.).
‹
›
Home
View web version