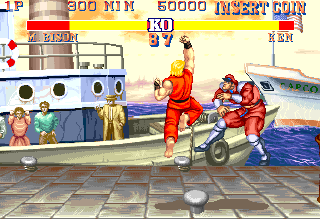 Genre: Action
Perspective: Side view
Visual: 2D scrolling
Gameplay: Fighting, Martial Arts
Art: Anime / Manga
Published by: Capcom Co.
Developed by: Capcom Co.
Released: 1992
Platforms: Arcade Machine, SEGA Genesis / Mega Drive, SEGA Master System, TurboGrafx / PC Engine
This game is the first improvement of the Street Fighter II series whose original version was released a year ago. The main novelties are the fact that the four bosses are now playable, that the fights between two copies of the same character are now possible thanks to a new color palette by character exclusive to this version of the game (a navy blue gi for Ryu and Ken , an orange GI outfit for Guile, a red dress for Chun-Li, a green suit for Vega and M. Bison, etc.); a large modification of the selection screen of the characters and their portraits, as well as a slight increase in the speed of these.
But the other important novelty lies in the many tactical and strategic improvements to the attacks of the original characters, the famous World Warriors:

The 1-on-1 system of the two previous Street Fighter games is maintained.
As in the original game, the player, once his credits obtained, can start the game and choose his character from the 12 available (the 4 bosses of the end of the original game are now playable from the start), then discovers his first opponent. To the player to make use of the combat techniques and special moves (specific to each character except for Ryu / Ken, or the differences are minor) to put his opponent KO (by emptying his "gauge" of vitality) by twice before the latter can not reach him.
The first of the two fighters who succeeds wins the fight. If the player wins, he continues the game and faces the next opponent. But if it is the opponent who wins the fight, then the player loses a credit and must give a credit within 10 seconds, otherwise his game is over (Game Over).
The player must face once each of the 8 characters of the starting game, including his clone (in the special outfit created for the occasion), then defeat the 4 end bosses (always in the same order as the original game) to finish the game. This gives 12 fights to win per game. The difficulty of these is growing: the first fight is easy, even captive to hang the player, while the third or fourth fight (in most cases Ryu or Zangief) is particularly strong to "curry" players (by speeding up the relay from one player to another) and increase the performance of the machine, while the four bosses are very difficult to overcome, especially Vega and Bison.
Although the 4 final bosses of the original game (The World Warrior) are now playable and selectable by the player, they remain end bosses and therefore are always the last fighters that the player faces, in the order Balrog - Vega - Sagat - Mr. Bison. The latter is the end boss, the player must win to win the game, finish the game and visualize the end of his character kinematics.
Another player can at any time get his credits and start the game in turn. If two players throw a credit at the same time, any single-player (ie computer vs. computer) combat is interrupted to make room for the character selection screen, or both players can select a fighter (the same if they desire it), and compete against each other where the first player was at the start. If it's early in the game, then the combat location will be random.
The principle remains the same as in a player mode: the first to put the opponent K.O. twice wins the fight. The loser loses a credit and must therefore hand one in to continue playing. If the second player to have joined the game loses the fight against the player present at the start, and does not give credit, his game is over and that of the starting player in the one player mode resumes, where it was interrupted (the fight interrupted is however lost, the player having to beat again the opponent he was fighting).

Characters marked with an asterisk are playable for the first time. Sagat, although present in Street Fighter I, was not playable.
‹
›
Home
View web version