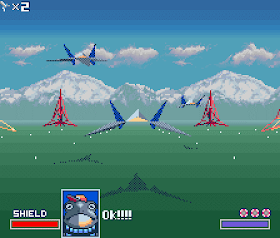 Genre: Action
Perspective: Behind view
Gameplay: Arcade, Rail Shooter
Setting: Sci-Fi / Futuristic
Vehicular: Flight / Aviation, Space Flight
Published by: Nintendo of America Inc.
Developed by: Argonaut Software Ltd., Nintendo EAD
Released: 1993
Platform: Super Nintendo (SNES)
For many people, the era of 3D games on consoles began with the PlayStation One. The most advanced can remember Nintendo 64, Sega Saturn or even 3DO. However, the first experiments with voluminous games began with SNES. And among the best of them - of course, the same, Star Fox from the very Nintendo sample.
Star Fox - Japanese game, in addition, the game from Nintendo. Therefore, the general setting and plot in it are rather parodic, rather than seriously trying to cause admiration of the player. A detachment of anthropomorphic animals in a distant cosmic future is trying to stop the galactic supervillain. I suspect that in Nintendo they tried to just parody sci-fi movies and serials of the mid-nineties, and that's why the plot and the setting were emphasized grotesque.
The acknowledged leader of the squad is Fox Fox McCloud, in his role and will have to get used to the player. However, the story in Star Fox, as well as in many other games of the 16-bit era - is just a necessary convention, giving the opportunity to experiment with 3D graphics and sharpened gameplay under it.
So, the main feature of the game is the real 3D graphics. The Super FX chip allows SNES to process honest polygon objects. At the same time, of course, the prefix works on the verge of its technical capabilities, and therefore the textures are predominantly flat monophonic surfaces, and the frame rate leaves much to be desired.
However, for 199 years, the technical side of the game is simply amazing. It is not necessary to talk about any realism: objects consist of corners and geometric figures, and the whole picture creates a sense of surrealism rather than realism. However, even being very tight in the technical plan, the designers were able to find several dynamic camera angles and make the locations and objects filling them different from each other and more or less recognizable. Summarizing, we can say that on SNES there is unlikely to be another one that is just as advanced from a purely technical point of view game.
And yet we play not in the schedule. What has become of the gameplay in such conditions constrained by the technical performance chosen? Star Fox is a rail arcade shooter. The SNES joystick is not suitable for moving 3D objects in 3D space, so the developers had to go to the trick: the player's ship flies ahead of himself, and the player can move it only in the plane of the screen, accelerate or slow down. The weapon is a standard blaster and rockets that can be upgraded by selecting the appropriate items on the levels.
According to the description, it may seem that all this is not very fun, but due to the level design and an excellent balance of complexity, Star Fox is playing very cheerfully. Levels on planets are replaced by flights in space, flights at the surface of the asteroid follow the battle of the whole fleet, and at the end of each stage the boss waits. Finally, an additional drive is achieved due to the lack of conservation. Three traditional levels of complexity are replaced by three different "routes", on which you can fly, with the first of them really mastered for several attempts, in the third one you will have to suffer a lot. In general, Star Fox's gameplay falls into the category of "easy to master, but difficult to get through" in the spirit of arcade games. And finally, the fact that Fox's team tried to give individuality to the team is of unimportant importance, which was quite possible.
Star Fox is, of course, an experiment. It obviously tried to experiment around 3D graphics and see what happens. It turned out quite interesting and very non-standard for its platform game. If you prefer pixel art, Star Fox is not your option.
‹
›
Home
View web version