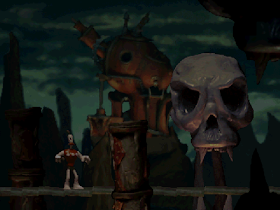 Genre: Action
Perspective: Side view
Gameplay: Platform
Narrative: Comedy
Published by: Electronic Arts
Developed by: Neverhood
Released: 1998
Platform: PlayStation (PSX, PS1)
The game consists of a large number of levels, some of which end in a battle with the "boss." The game has a huge number of bonuses. There are also story videos made with a classic humor for the series.
Bonuses:
A piece of plasticine - the collection of such a hundred pieces equals one life, such an element was found in a variety of platformers.
Blue spiral - the collection of three of these at the stage allows you to get on the bonus.
Head Willy - with her help you can collect all the bonuses on the screen.

The main villain, Klogg, on the plot of the first game was banished from the country of Neverhood, and, flying in space, falls on the planet Idznak. Once there, and killing their leader, he decides to take over the population of the planet - the very Skullmonkeys - to build a death machine (Evil Engine No. 9) and destroy the country of Neverhood. However, the monkey named Jerry-o did not submit to Kloggmanki and sends a flying transmitter Klaymen (English Klaymen), the hero of the first game, which in this very country was. Transmitter grabs Clamen and carries it to Iddznak. Once on another planet, he can not relax because the local population is hostile to the protagonist. After some time, Clamen receives a message from the primate who did not decide to reconcile with the situation, he explains the incident to the message, he tied the note to the potato, which he said is useful to Clamen . The hero will have to stop Klogg.