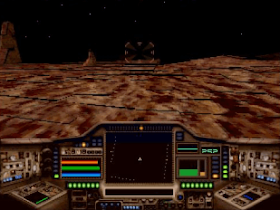 Genre: Action, DLC / Add-on
Perspective: 1st-person
Gameplay: Shooter
Setting: Sci-Fi / Futuristic
Published by: Electronic Arts
Developed by: Electronic Arts
Released: 1994
Platforms: 3DO Interactive Multiplayer, PlayStation (PSX, PS1)
Shock Wave: Operation Jumpgate is an addition to the first part of the Shock Wave, if you need a disc with the original game to run it on Pansonic 3DO. As with the game Return Fire: Maps o 'Death. It's been 7 years since the alien attack on the planet Earth was repulsed. But now they are found within the solar system, and you again have to go to the task of destroying them. You will visit many places, such as Mars, satellites of Jupiter and Saturn, a belt of asteroids, etc. and all this for five exciting missions.