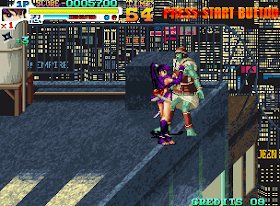 Genre: Action
Perspective: Side view
Gameplay: Arcade, Beat 'em up / Brawler, Fighting
Setting: Fantasy
Published by: SNK of America
Developed by: Noise Factory
Released: 2001
Platform: Neo-Geo
The third and final part of the series is significantly different from the rest. Here the game's graphics are completely redesigned. Each character is well drawn. There are four people in total, and two more will be added as they pass. All have their own properties and a set of techniques. In addition to bare hands, you can use weapons. Effectively look special magic tricks. The battles became even more colorful.
‹
›
Home
View web version