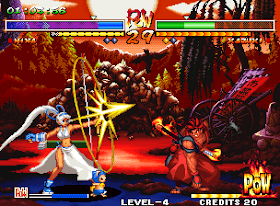 A história oficial, como dada pela SNK, é a seguinte:
"It is the way that requires one to become a demon: To slash at God and raise a weapon toward Buddha, to turn one's back to Heaven and carve your own destiny. To sever all ties to virtue and embrace destruction. To cut off all obligations and plunge into mayhem. When the ordained meeting of 28 fierce warriors begins, all that will ensue are a series of duels to the death. These individuals entrust their fates to their skill and their weapons. For those who cannot gain mastery over technique, death is the only just desert. For those not up to the task of seizing destiny by the throat, a cherished end in battle is their only hope.
There is no need to pontificate over such a merciless existence. Sacrificing your life on the path to mastery itself, this is the only way of death honored by those of all ages. En garde! Your destiny is now to be decided!
Twenty-eight Samurai characters-including a full line-up of the boss characters Shiro Tokisada Amakusa, Mizuki Rashojin, Zankuro Minazuki & Gaoh Kyogoku Hinowanokami-clash in one epic title! The Sword Gauge, Rage Explosion, and Concentration One systems are also back and better than ever. This final SAMURAI SHODOWN title for the NEOGEO and its dream team cast of characters will slice your socks off!

Unlike Samurai Shodown V, the story of this updated version played a small role in the game through only the characters' claims of victory. There is a small dialogue that is unique to the Japanese version, where it was played when the player's character was playing his zetsumei ougi. The English version simply uses its normal victory lines, depending on how many life points it had left.

A significant number of cast modifications were made between the SSV and SSVsp games. Among them, the mid-chiefs Sankuro and Yumeji were removed and replaced by SSI chief Amakusa Shiro Tokisada and SSIII chief Zankuro Minazuki. In addition, the secret character Poppy was traded by SSII boss Mizuki Rashojin as a selectable character without the need to use secret codes.

In addition to the character list changes, various graphics and sound modifications were made to give the game a lighter look, though all the characters who returned used their original Samurai Shodown IV voices. Existing SSV scenarios have been modified in one way or another, in addition to new scenarios being presented for the arrival of Amakusa, Zankuro and Mizuki. The Mizuki scenario is a whole new one.

The gameplay remained relatively the same since Samurai Shodown V, but there was a revolution in the graphics, bringing new ones, including the character pictures made by the artist Satoshi Ito, bringing a somber atmosphere similar to that of Samurai Shodown III.
It has some modifications in the gameplay, making it more balanced than its predecessor. The biggest change made in gameplay, however, was the introduction of Zetsumei Ougi, or "Overkill Beat." If executed properly, it would instantly end the match for your opponent, not depending on your standard of living, a concept similar to that of the Guilty Gear series (except for the fact that the execution conditions are stricter: the character to be executed has to be in "Rage" mode, while the opponent's standard of living must be below the point where he could use Concentration One, which was introduced in Samurai Shodown V as a special slow-motion mode that they could increase through meditation (played when holding the D button standing). [2] The initial move is the same for each character when the player tries to execute it, but if he is struck, the attacking character would give the final blow to his opponent in his own style.
In addition to the overkill beats, Samurai Shodown IV fatality effects were brought back to this game, such as being cut in half horizontally. New effects of fatality were also introduced, such as being cut in half vertically with the victim's blood spurting upon the winner, just like in Samurai Shodown IV. In addition, Nakoruru and Rimururu, who were both "immune" to the effects of fatality in SSIII and IV, were also able to experience such effects at the end of the match, sometimes having them shout violently.

The great combination of violent acts represented in Samurai Shodown V Special generated a lot of repercussion. This led SNKP to censor the AES cartridge shortly after the event known as Sasebo slashing.
Since the AES version of the game was approaching its release date on July 8, 2004, it was mysteriously delayed a week by moving the date to the 15th. When it finally came out, the entire community that accompanies the games of the company was shocked to see that not only common fatalities were withdrawn but also Zetsumei Ougi was greatly diminished, turning it into a version of the issen of the characters. First, this censorship act affected the entire worldwide launch, not limited to the only Japanese audience. Not only has this censorship modified the game but it has brought with it several flaws, for example in the training mode exclusive to the AES version.
After learning of the disappointment of these fan modifications, SNK remade the game shortly after the concert of the defects brought by the acts of censorship, in addition to replacing the Zetsumei Ougis, but partially. The shredding of the body was still absent, which caused some zetsumei ougis to have no sense. However, some of the violent details remained, like the death screams and being crushed on the wall.
The only way for players outside of an arcade to experience the zetsumei ougis would be either by emulating or getting an unpatched version of the game and applying the bios Razzola's Universe on it, which would enable access of uncensored versions of the hits and that would fix the defects which the modifications of the censorship brought.