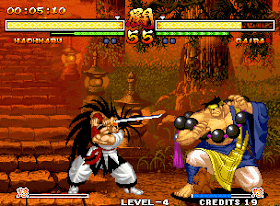 Genre: Action
Perspective: Side view
Visual: 2D scrolling
Gameplay: Fighting
Art: Anime / Manga
Published by: SNK Playmore Corporation
Developed by: Yuki Enterprise
Released: 2003
Platform: Neo-Geo
Samurai Shodown V (or SSV only), known as Samurai Spirits Zero. In Japan, is the eighth game in the Samurai Shodown sword fighting series, developed by SNK. It was one of the last games to be released for Neo Geo. The original Japanese version of the game has a large space for dialogue in single player mode, but all these scenes have been deleted in the game version for English. Unsurprisingly, this displeased English-speaking fans. The home version of the game, released for Xbox, has such scenes translated into English. The game was also released for PlayStation 2, but such a version only became available in Japan and Europe since SCEA did not approve it.

Following SNK's revitalization following its collapse in 2001, the company decided that it would be worth reviving the Samurai Shodown series with a new game. As part of their reorganization, game development work was given to the relatively unknown company Yuki Enterprise, which had basically only created simulation and board games for the PlayStation 2 Simple 2000 series in Japan, and had no experience in develop fighting games. The announcement of this caused considerable turmoil among fans of the series.
Despite this, SNK was able to excite fans when it announced that Nobuhiro Watsuki, the creator and author of the Samurai X series, was hired to design some of the new characters, and they were gradually revealed through silhouettes on the official website, and Slowly the official artwork was shown. Later it was finally revealed that the game would be a prequel to the rest of the series, with the time being set being two years before Samurai Shodown, the first game in the series released. This has created its own problems with the timeline of the series.

The gameplay had a change in speed, a little faster than Samurai Shodown IV, and the button system was modified again.
The "Slash" / "Bust" system of previous games did not take place in the game, causing each character to have only one form. With this, alternate forms of some characters have become original characters in themselves (such as Enja and Rera).