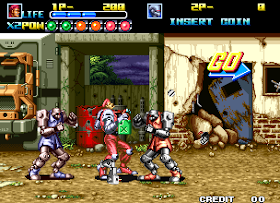 Genre: Action
Perspective: Side view
Visual: 2D scrolling
Gameplay: Beat 'em up / Brawler
Setting: Sci-Fi / Futuristic
Published by: SNK Corporation of America
Developed by: SNK Corporation
Released: 1991
Platform: Neo-Geo
This project belongs to the genre of beat'em up. Her plot is somewhat similar to the one used in the movie Terminator. Artificial intelligence became so powerful that it enslaved all of humanity. Almost nothing is left alive around. Many people were captured, and those who managed to escape created a special robot capable of destroying enemies. It can turn into a special car, which has a great destructive power. The amount of energy of the robot affects the firepower of the attacks. The main hero on the road are different enemies. Especially the bosses were executed in an original way. After the passage of each mission, the main character rescues several hostages.
‹
›
Home
View web version