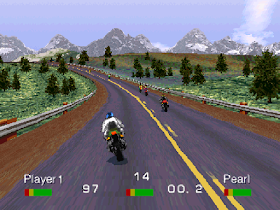 Genre: Action, Racing / Driving
Perspective: Behind view
Vehicular: Motorcycle, Street Racing
Published by: Electronic Arts
Developed by: Advance Technology Group, Buzz Puppet Productions
Released: 1995
Platforms: PlayStation (PSX, PS1), 3DO Interactive Multiplayer
This game, perhaps, is one of the few masterpieces of electronic entertainment of all times and peoples. And for a while you will become an awful rocker chasing with terrible speed on your fancy motorcycle on American cities and highways, fucking with rivals and policemen with hands, feet, chains and clubs, knocking out the sluggish old women and businessmen who were on the way. Sometimes, of course, this rocker falls off a motorcycle, flying fifty somersaults until it hits the wall of a house or tree, but then he jumps up, finds his car and rushes on to the finish.
The task of the game is to overtake all of them and come to the final point of their journey by one of the first three riders. It's not so easy to do, because you do not have to break the motorcycle completely and not be arrested by the police. In addition, from level to level, the aggressiveness of your rivals increases, which not only quickly drive and sometimes shove, but also fight in a terrible way, striving to push you all the time under the wheels of the oncoming car. Each of the five levels consists of five races on different routes, for every race you win, you earn money, so you can gradually buy more and more powerful motorcycles. However, even the most expensive and fastest of them will not help you at the fifth level, where on the seventeen mile track you will be swept by rivals, if you are denied luck. In general, this game is different from its counterparts by an amazing injustice to the player. We are used to the fact that usually it is stronger than its rivals, kills everyone from the first blow, rides always faster, has stronger protection. Here everything is against you. You start last, all the police catch only you, fall into the sea and drown there a motorcycle - also only your privilege. But, I must say, the game is made of this only more interesting.
In addition to the race itself, by the way, very much done in terms of graphics, especially when rushing at a speed of 160 miles per hour in the city, the game has a number of curious things. Firstly, it's a music box that allows you to choose one of the 14 compositions for the "thrash bands" (those are the words in the credits, anyway) like Paw and SoundGarden for listening on the background of the game menu (in CD quality, of course). Secondly, these are two video clips of the mentioned groups, which the game shows in case of your long inaction. Finally, after each race you are shown a small video screen, where, depending on your success, you are either congratulated, or Oddly, in every way bullied. there are so many cutscenes here, so all the time you see something new - the silencer will be unscrewed, the beer will be poured, the paint will write something funny on your back, then the beloved girl will give you a heel in the groin.
Everything that you see in the game is the result of video shooting. Several stuntmen specially jumped on trampolines in order to more accurately depict the process of the motorcyclist falling from his iron horse at a speed of 160 mph, followed by fore-opening the wall of the house. All the shrill old women with huge shopping carts with products, arguing on the road businessmen, punks and skateboarders, girls-collective farmers and silent farmers with tourists on the roadside - all these are actors who were toiling at some studio dope, falling with yelling to the floor, as if they were knocked off by a motorcycle. Thanks to this, the main goal of the game is not so much to win as participation, especially for a few bloodthirsty people.
Ironically, the game is extremely popular not only in the male audience. I watched two virgins, young philologists, who, with terrible excitement, drove along the roads, moreover, their main goal was not to get the rivals down. Most of all they were happy, if this opponent managed to fuck with a club or a leg, and if they pushed him under the oncoming truck - there was simply no fun.