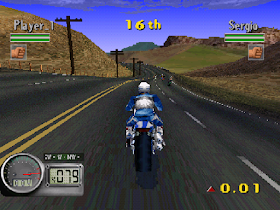 Genre: Action, Racing / Driving
Perspective: Behind view
Vehicular: Motorcycle, Street Racing
Published by: Electronic Arts
Developed by: Electronic Arts
Released: 1998
Platform: PlayStation (PSX, PS1)
The Road Rash series has traveled on various platforms for a long time and now it seems as if it takes a second start on the PlayStation in a 3D version. You will race and fight with four gangs of rockers, each in its own type of motorcycle, with its racing style and own style of fighting (and its tricks). Over 200 miles of tracks along American roads are laid in a 3D 3D world. In previous versions of the game, the tracks were flat roads that continued from level to level, with monotonous landscapes and a boringly repeating scenario. Here everything is different, and on 32 (!) Routes you will have to work hard to choose the right strategy and route. Still unknown what weapons are at your disposal (you can select it from opponents on the track), but the trend is that the main weapon is your motorcycle and driving skill.
The game has only one player mode, but races are possible in other modes: Time Trial, Trash, Big Game (Season Championship). The winner, as always, receives money and can buy one of 20 motorcycles, which one likes. In the course of the race, you can inspect everything around (and even in flight during the jump), put the "cops" in place, overcome obstacles. You can steal motorcycles from defeated rivals, from policemen (why do they always stick?). You can also carve a car if you want.
It's clear that the strength of the game was excellent graphics and a great perspective.