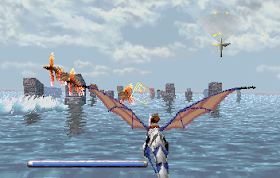 Genre: Action
Perspective: 1st-person, Behind view
Gameplay: Arcade, Rail Shooter
Vehicular: Flight / Aviation
Setting: Post-Apocalyptic
Published by: SEGA of America
Developed by: Team Andromeda
Released: 1995
Platform: SEGA Saturn
Panzer Dragoon is a video game in the genre of a railroad shooter developed by Team Andromeda for the Sega Saturn console, later reissued for Windows and PlayStation 2, and included as a bonus to the Panzer Dragoon Orta game for the Xbox platform. The first game of the same name series.
The action of the story line takes place in a fictional apocalyptic world. The player takes on the role of hunter Keil Fluge, who with the help of his powerful blue dragon wants to stop his opponents, who are chaos and destruction.
Panzer Dragoon has become one of the few games available for sale with the release of the prefix Sega Saturn. Since its release, the project has received positive feedback from critics and players, primarily for the unusual gameplay and fantasy world. Commercial success prompted developers to release the sequels of Panzer Dragoon II Zwei, Panzer Dragoon Saga and Panzer Dragoon Orta.

The player controls a flying dragon with a rider, who, during the flight, collides with various machines and monsters. The action takes place in the post-apocalyptic world, consisting of the mysterious ruins of ancient civilizations. The dragon moves only in the forward direction, but the player has the opportunity to bypass obstacles and turn left and right. To the left of the screen is a radar showing enemy shells and obstacles. The player can change the viewing angle, quickly looking in the right direction. Enemies can attack from different directions; opponents differ in size and health from each other.
Shoot from the enemies to help two weapons: a pistol rider allowing to aim only at a single object, as well as laser and fire dragon that helps to destroy up to eight opponents. In some cases, when a large number of monsters, you want to use the laser, and pistol shots can be effective in the battle against the bosses appears on the screen. In total there are six levels in the game; the duration of each pass takes about five minutes. At each stage, except the last - the final battle with the boss, but before they start there are small pauses. Between the levels are demonstrated in-game videos, revealing the secrets and details of the plot.

The game takes place in the distant future, thousands of years after the great war of people against biological weapons. At the beginning of the game, people regained some level of organization and began to form different tribes and nations. One of the nations called Empire discovered a black tower in the middle of the lake, which gave them access to the vast reserves of ancient weapons previously used against monsters. As a result, this find has become an important key for the conquest of the Empire by other territories.
The game begins with the fact that the main character Cale Fluge (in the American version of the character's name is not indicated), hunting in the canyon, sees a flying ship. From it, two creatures land on the ground and attack the hero. He escapes into a large ancient complex, built right in the rock. Exploring the ruins, he finds old technologies, causing great damage when using them. However, the character is attacked by a giant creature. In the cave you can hear a rumbling. A blue dragon arrives through the hole with a rider on his shoulders. Soon in the cave there is an explosion, which leads to its destruction. The main character, coming to consciousness, sees the battle of two dragons. Deviating from the explosion of the black dragon, the rider of the blue dragon gets wounded in the chest. The blue dragon flies to the protagonist; after landing, the rider tells the hero that he will not allow the black dragon to reach the tower. The rider then dies. Cale raises the fallen gun, climbs the dragon's shoulders and flies away.
In the first level of the game, the main character and his dragon fly through the drowned city, where both face a small patrol ship, sending reports and information to large ships. The battle with the fleet showed that the imperial forces were specifically looking for a blue dragon to destroy it. The action of the second level occurs in the desert, where Cale and the dragon fight with giant creatures, similar to worms. During the storm, a black dragon arrives, whose main characters win. The events of the third level unfold at night in the mountains, in which the characters find people serving in the imperial forces to study the ancient ruins. As a result, this "meeting" leads to conflict. After the end of the fight, Cale and the dragon fly to the ancient center, where the characters are pursued by airships and sentries left by an ancient civilization. During the passage of the fifth level, they defeat a large powerful armada of imperial ships over the forest. Cinematic intro shows a fleet entirely composed of dragons flying out of the tower, which attack the army of the Empire. The sixth stage takes place in the capital of the Empire, where Cale pursues the black dragon, along the way creating obstacles to creatures and machines. After firing at the Imperial Defense Buildings, the black dragon mutates into a giant creature, and begins his final battle against the main character and the blue dragon. After a long battle, the black dragon suffers defeat and falls into the ocean.
The main characters climb the tower. Climbing up, the blue dragon surrounds Cale in the force field, lifting him from the saddle, and leaves him in the corridor. The hero observes that the dragon continues to ascend to the main tower. A dazzling light appears, the tower explodes. After some time, Cale wakes up in a desert area, adjacent to the ocean. Looking down, he sees the footprints of the blue dragon's feet, realizing that he saved his life and flew away in an unknown direction.

The game was created at a time when Sega was preparing to release its new console Sega Saturn. The prefix was supported only by the internal forces of the platform holder. The creation of the project in the genre of a rail shooter began in early 1994 with the team of Team Andromeda led by creative director Yukio Futatsugi and artist Manab Kusunoki. Over a total of 15 people worked on the creation of Panzer Dragoon. The project from the very beginning was developed in an arcade style and with the support of 3D graphics; This concept was supported by most of the developers, including Manabu Kusunoka. An important role in the creation of the gameplay Panzer Dragoon was played by such games as Space Harrier, Starblade, Star Fox and RayForce. The leaders of Futatsugi and Kusunoka decided that the player would control the dragon, which should be worked out to the smallest detail. This choice was due to the team's desire to create an original gameplay, unlike other games in the genre of a rail shooter. The name of the game originated from its original concept; At first the game was planned to be called Armored Dragon, however in Team Andromeda such headline was considered too "soft", and it was decided to rename the project to Panzer Dragoon.
The creators took about 3 months to create the levels. Like the anime of that time, the game takes place on the ruins and relics of ancient humanity. In addition, Yukio Futatsugi as a child was fond of the science fiction novel "Long Twilight of the Earth" by Brian Aldis, where the work takes place on the Earth, divided into hot and cold territories.
In the first video presentation of the game, the dragon was with green skin, like medieval frescoes, but the team quickly decided to change the design and make it more sci-fi. In order to create the original dragon, the creators decided to modify it: now the skin became blue, white spots appeared on the body. White also depicted ancient ruins and flying technology to emphasize their ancient age. Creating a game world, Team Andromeda decided not to go to experiments, but to depict levels in a science-fiction style, similar to the 3D games of that time. Inspiration for the creation of the dragon and the design of the characters came from the anime and manga, thanks to which the artist Manabu Kusunoki created the characters in the Turkish style, so that they did not look like the Europeans shown in the early video presentations. After numerous news and articles about the game, critics noted her similarity with the works of the French artist Jean Giraud, in particular, with the comics "Arzak", as well as the anime "Nawsikaya from the Valley of the Winds" by Hayao Miyazaki and the film "Dune "By David Lynch. Nevertheless, Kusunoki decided not to include in the Panzer Dragoon large robots from the popular Gundam franchise, to paint the prickly and colorful hair of the characters and to depict them with big swords as in Final Fantasy. The artist Kentaro Yoshida described the process of creating the game as a saga like "Star Wars", since the unearthly world seems real. Takashi Iwade, responsible for in-game videos, models of characters and enemies, said that creating the main war ship of the game, he drew inspiration from various retro objects of the industrial revolution era, especially in old watches, submarines and even in ordinary fishing boats.
‹
›
Home
View web version