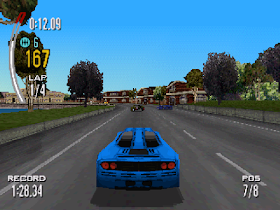 Genre: Racing / Driving
Perspective: 1st-person, Behind view
Gameplay: Arcade, Vehicle Simulator
Vehicular: Automobile, Street Racing
Published by: Electronic Arts
Developed by: EA Seattle, Electronic Arts Canada
Released: 1997
Platform: PlayStation (PSX, PS1)
In the first version of this game, almost ordinary cars took part. Now you will become the owner of new wonderful super-cars, some of which are just prototypes of future winners of the trails. You could see them only in dreams or at the last car dealerships. The mouth opens with amazement at the sight of cars worth over 9 million dollars! Here they are, at the start. Here and McLaren F1, Ford GT90, Italdesign Gala, Jaguar XJ220 and five more handsome! The merits of this version can safely include comfort and a sense of confidence at a speed of 200 m / h. True, this can be more attributed to control from an analog controller, but the usual one will also fit (for want of a better one). Each stage is just a miracle, you can not even compare it with the first version of the game. You can lay dizzy bends, such maneuvers that the car literally soared into the air - simply amazing! Especially like the fans of the race option with one racer, which creates a surprisingly real atmosphere and a sense of the race itself. In short, lovers of the first version will not be disappointed by the continuation. It's worth the money, - be sure. In addition to the new cars - these fantastic monsters are expensive, at your service are 5 completely new routes, perfectly equipped and comfortable.

Short description of some routes

This is a fairly common route on which there were races of different cars. On the roadside in front of the fence on the bends are broken lawns - do not stop by them. And it's not about drifts or loss of control - just lose speed. What so good here! By the way, do not pick up the speed directly from the start (although you really want it!), Wait until the first steep turn.

Here, both urban roads and mountain gorges. This is a pretty new route; steep bends just a few. It's good to train and master the management of your favorite new car. In general, this is a simple route, and there are no special tricks in it. The only place is the appendix on the right. Here you can frolic, and at the same time and knock out other cars from the track.

Be attentive on the urban sections of the road - many homes are almost on the road! Try to beat the opponents while passing turns while they are busy fighting with each other. The serpentine section of the route passes at the third or fourth speed. Be careful.

Although most of the steep turns on this track are equipped with wide gravel strips, try not to drive on them, because not only will you lose speed, but there is a risk of skidding. The track allows you to develop high speed.
However, closer to the finish line, be careful - this is a difficult stretch of the road - the car can be thrown from side to side. Better slow down.

A very tight loop is a real test for drivers. Even in direct areas, be careful. A sharp turn - and you are in the abyss (such a turn after the bridge - attention!).

To get them, just enter the appropriate password and start the race. Note: these codes are only valid for single player mode. For the two-player mode, you must change the end of the "ME" code to "U" (for example BEETME-BEETU).
BEETME - Trabant
BMRME - BMW
BMZME - Mercedes Benz
JEPME - Jep Commanche
LCME - Toyota LandCruiser
VOVME - Volvo
TRAMME - A tram that does not need rails!
STDAME - Stand A
STDBME - Stand B
STDCME - Stand C

On the Main Menu, select Options then the password. Enter the password for any of the following cars, and you can control 26 secret machines! Return to the main menu and select the race (Race). Does not matter if you chose a normal car. Note: if you want to "drive" on secret machines in two-player mode, simply replace the ME password with U. For example, instead of ARMYME, enter ARMYU.
ARMYME - Army Truck;
BUSME - Yellow School Bus;
BUGME - Wolkswagen Bug;
CITME - Citroen;
JERME - van Comanche;
LIMOME - White Limousine;
MAZME - Mazda Miata;
QUATME - Audi Quattro;
SEMIME - Semi-truck Cab;
SNOWME is an army truck of a different kind;
VANME - mini bus;
VOVME - Volvo Station Wagon;
YJME - Jeep Renegade / Wrangler;
CRATME - Brown wooden crate;
LOGME - Long log;
OUTHME - Small brown Out House From North Coutry (small brown house from the northern territories - mobile);
TREXME - T-Rex from Monolithic Studios;
WAGOME is an old covered van from Monolithic Studios.
Note: All these passwords are stored in memory for only one race. Off-road in Monolithic Studios.

Enter the LILZIP password. Win the competition and get your prize-Indigo Team.