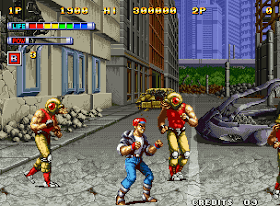 Genre: Action
Perspective: Side view
Visual: 2D scrolling
Gameplay: Beat 'em up / Brawler
Published by: SNK of America
Developed by: SNK Corporation
Released: 1992
Platform: Neo-Geo
In the year 2050, a mad scientist was arrested by his superiors after conducting bizarre biological experiments. However soon after, his lab exploded and the scientist himself disappeared mysteriously. Nowadays, seven years later there are new buildings at the top of the forgotten dump, where the experiments took place and suddenly a genetic virus began to spread among the inhabitants, thus transforming them into vicious mutants. Two young fighters from the local town, Ricky Jones and Johnny Hart, return to the city after being away for a long time and seeing the chaos that occurs, they decide to clean up the city before the mutants spread all over the city. the country. Along the way they will meet not only mutants but also mechanically modified enemies (cyborgs) that the mad scientist has created to stop them.

The player directs a character in a beat them all in 2D seen in profile (with depth of field management), who must fight hordes of enemies. Two buttons are available: the first is used to hit and the second to jump, the combination of the two allows to make an uppercut.
Added to this is a special attack that breaks the life meter. Other special moves are available by collecting bonuses (four in total) that come to replace the basic special attack, they are more powerful, more impressive and do not consume life.
There are two playable characters but no choice is possible in the game, the heroes being linked to either the first or the second player. To choose your character you must start the game on the right side of the terminal or with the gamepad related to the hero of your choice.
The game consists of six levels, the player must beat a boss at the end of each of them.
‹
›
Home
View web version