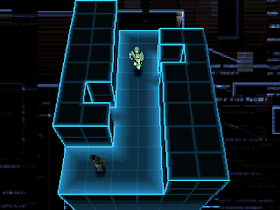 Genre: Action, DLC / Add-on
Perspective: 1st-person, Top-down
Gameplay: Shooter, Stealth
Visual: 2D scrolling
Narrative: Direct Control
Add-on: Story / Mission
Interface: Spy / Espionage
Published by: Konami of America
Developed by: Konami Computer Entertainment Japan
Released: 1999
Platform: PlayStation (PSX, PS1)
You will play as many as 300 missions, based on 30 basic VR Training Mission. Start with the mode Sneaking Mode, in which you must avoid the keen eye of the guards and make your way to the exit. There are 15 levels in this section, and as soon as they are finished in Practice mode, you will have to repeat everything again, but already with the Time Attack time. When this foundation of the game is mastered, it is necessary to pass the modes Weapon and Advanced. The more missions you can successfully complete in these three sections, the more missions will be available in the Special mode. No doubt, this is the most wonderful section of the game, a steep test of your skill and abilities.
Start with a simple mission 1 Min Battle, where you are given only one minute to destroy a certain number of targets using a standard arsenal of weapons, and then the mission of Vs 12 Battle is to repeat the previous mission, but with 12 enemies in each of the eight stages. Of course, many of these missions can be performed only with the use of the entire high-tech arsenal of Snake! On some missions it is necessary to shoot glass targets, to destroy guards in sniper mode from a long distance and even to direct Nikita missiles through complex labyrinthine structures. Maybe, some missions seem to be unpretentious to someone, but taking into account the time limit, we'll have to sweat!
It will become much more difficult when you get to such modes as Puzzle, Variety and Mystery. The Puzzle mode requires very careful maneuvering and taking into account the time limit. For example, in the 2nd mission, the platforms are arranged in the form of a pyramid, and on each of them there are two guards. Use one guard at the top of the pyramid: drop it down (to the center) and knock down the guard downstairs. Well, like domino chips. But if the guard will be able to detect you, he will have time to warn his downstairs, and he will step aside. Very difficult! In the Mystery mode, you take the role of a detective investigating the murder.

Launch the Claymore mines according to a thoughtful plan to unerringly destroy the guards on the route of their patrol.
Shoot the flying saucers with Stinger missiles, do not let them land and capture you.
Try to destroy the guards before they pinpoint you. If found, the task will become much more difficult, and they themselves will begin to attack.
In Photography mode, you can take photos of Dr. Naomi and save them on a memory card. The more VR Missions you will manage to pass, the closer you can get to your "model".
In Variety Mission 13, lure the giant soldier on the right (he will enter first) before both soldiers get to the point where they are standing still. At the moment when the first soldier will fall, the second soldier will just get to the place and stand motionless. The first soldier will rise very embarrassed, yell and angrily attack the second soldier. The second soldier will grab him, a fight will begin, and you will calmly finish the mission.

Ninja Training Mission you will open in a special mode Special Mode, but after successfully complete other parts of the game.

During the kinovision for the game several times you will see the Ninja with a face covered with a mask. For the fourth time, he will appear with an open face, and at that moment you should press the "Start" button. After that on the title screen, the Ninja will be without a mask, and you will be able to select the "Ninja" option from the "Special Category".

To access the photo shoot with Mei Ling (in the Extras option on the main menu), you must have a memory card in one of the slots, on which the successfully passed mode of Sneaking Mode will be recorded, where you must set the records at all Time Attack levels. Such levels are only 30. At fifteen, you operate without weapons, while the other fifteen are armed with Socom. It is clear that this will take a very long time and will require a lot of skill.
‹
›
Home
View web version