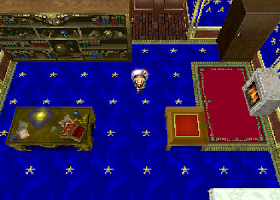 Genre: Role-Playing (RPG)
Perspective: 3rd-person, Top-down
Visual: Isometric
Art: Anime / Manga
Pacing: Turn-based
Setting: Fantasy
Published by: Panasonic Software Company
Developed by: Micro Cabin Corp.
Released: 1995
Platform: 3DO Interactive Multiplayer
Swords & Sorcery (Lucienne's Quest in the US) is not the only RPG for 3DO, but according to many it's the best. The game is the second RPG for the 3DO platform from Mirco Cabin (after the Guardian War), but, unlike other developers using already created resources, this is a completely different game, with a different engine, characters, rules and plot. For Sega Saturn RPG was released only in Japan under the name of Swords & Sorcery.
On one bright, sunny day, a young man named Ago approached the famous tower of the great magician Kokindo. Guys rarely go on fortune tellers and wizards, this is more of a lot of sex, but this time the case is very serious. The Juninas (wolf people) attacked his village, biting them all. Residents became werewolves and after darkness their appearance changes to a wolf. No famous doctor could cure a terrible curse and now only hope for magic.
What was his surprise and disappointment when, instead of a gray-bearded old man, he turned out to be a 15-year-old distracted little girl, who at times speaks to herself! As it turned out, this is a young pupil of Kokindo named Lucien. At her own will, or at the insistence of the teacher, she persuaded Ago to take her with her.
Traditionally, on this I stop the narrative about the plot of the game, so as not to spoil the intrigue.
The combat system is extremely unusual, since it has strong strategic elements. Fights are conducted on an isometric map. It is possible to move around it, skirting the obstacles, or hiding behind them. You can also hide the weak fighters or strong magicians behind the back of a well-equipped shirt. Arsenal of actions is also diverse - especially striking Lucien - this fragile creation hides under his cap an unimaginable size of a mighty sorceress with tons of spells! Moreover, in some spells you can choose the power for optimal mana consumption. Ago is especially strong in the shape of a wolf, so, it's better to appear here at night. Other heroes also have their own distinctive features.
3D worlds, detailed graphics, various types of review, pleasant music, memorable characters - the game will not leave anyone indifferent. And how I like management - if Lucien rests against a corner, she tries to round it by herself.
Naturally, to the laurels of the unshakable Final Fantasy game Lucienne's Quest does not hold out, it is much easier. That only it is possible to restore health by spreading the tent anywhere on the global map. And Game Over is not the end, but teleportation to the beginning of the dungeon with the preservation of experience from the last attempt, so that any location is passed if not from the first attempt, then with the second for sure. The plot is not very complicated, no secret conspiracies and sharp turns. About 30 locations, 3 maps, 5 main characters (each with its own characteristics), many enemies.