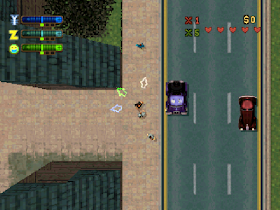 Genre: Action, Racing / Driving, DLC / Add-on
Perspective: Top-down
Visual: 2D scrolling
Gameplay: Shooter
Narrative: Crime
Add-on: Story / Mission
Published by: Rockstar Games
Developed by: DMA Design Limited
Released: 1999
Platforms: PlayStation (PSX, PS1), Game Boy Color (GBC)
In Grand Theft Auto 2 (GTA 2) you play the role of a criminal who works for a giant global concern controlling the trade in special drugs that actively influence the brain. Game GTA 2 was released simultaneously for both PlayStation and PC in the fall of 1999. This version is much more interesting and more elaborate than the first one. The action takes place in three detailed sectors, divided into four zones. Gangster territories are occupied by three of them, the fourth territory is neutral as it is - gangs do not live here. You start from Downtown, then move to the Residential area, and finally the game moves to the industrial zone. Just like in the previous version of the game, here you are given a huge freedom of action. When you get tired of doing missions, you can go anywhere or go on foot to any place in the city where you want. The game also has a lot of weapons. You can destroy enemies from pistols, from rifles, from rocket launchers, from stakes and even bottles with a combustible mixture, which are called the Molotov Cocktail, as well as grenades, from rifles, from tasers and from flame throwers. If you do not know how to finish this or that mission, or you can not find any specific secret, then we will try to help you. The game has quite a few elements of the role genre, you feel like a real intruder, commit crimes, steal futuristic cars and so on. The game looks much better than "GTA: London", which means it's exactly the place in your game library! Is the criminal world going to live forever ?!

When you see a company of guys walking in a row and posing as Elvis Presley, you can finish them off and get a bonus. Take a decent car, accelerate and sweep them all in a straight line, and if you finish them all at the same time, then you will receive a bonus.
Hell Oil costs 10.0000 bucks. Get this oil and install it in your car, so that when the pursuers get you very much, you can pour it onto the road and they'll fly away the devil knows where.
Max Paynt is worth $ 5,000. This device can change the numbers on your machine, and at the same time repair almost any damage.
Bomb Bay Mix costs 5000 dollars. Sets a bomb in your car.
S & W costs $ 25,000, machine guns are installed in your car.