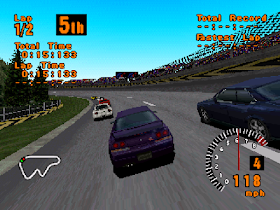 Genre: Racing / Driving, Simulation
Perspective: 1st-person, 3rd-person
Gameplay: Vehicle Simulator
Interface: Direct Control
Vehicular: Automobile, Track Racing
Published by: Sony Computer Entertainment America
Developed by: Polyphony Digital Inc.
Released: 1997
Platform: PlayStation (PSX, PS1)
American release took place on April 30, 1998.
Developers managed to find a "golden mean" between the arcade and the simulator: despite the obvious "arcade", Gran Turismo has a fairly thin physical model. Without exaggeration, we can say that the game opened the door to the genre of realistic autosimulators on consoles. The game is included among the best games of all time and platforms by the Internet portal GameSpot.

The game has two modes: arcade and realistic.
In arcade mode, a player can choose cars of such manufacturers as Nissan, Honda, Acura and Aston Martin and others. Each car has its own tuning map. All the tracks in the original version of the game are fictitious. Really existing routes, such as Laguna Seca, Le Mans Sarthe and New York City, appeared in subsequent versions of the game.
In a realistic mode, the player gets the opportunity to make a career, starting with ten thousand credits, for which you can buy a used car. Further the player should receive one of three licenses: B-class, A-class or international A-class.