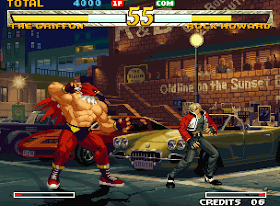 Genre: Action
Perspective: Side view
Visual: 2D scrolling
Gameplay: Fighting
Art: Anime / Manga
Published by: SNK of America
Developed by: SNK Corporation
Released: 2000
Platform: Neo-Geo
It is the ninth and final chapter of the Fatal Fury saga, and is characterized by both a renewal of characters and modes of play within the saga.

The action takes place 10 years after the death of Geese Howard, something that is remembered during the introduction of the game recreating the battle of Terry Bogard against this one. Terry is in charge of taking care of Rock Howard, son of Geese. At the time of the game happens a tournament, organized by Kain R. Heinlein and that denominates like The King of Fighters: Maximum Mayhem. Rock Howard decides to sign up to find out who his mother is and why the source of his power.
It is noteworthy that all the traditional characters in the Fatal Fury saga (except for Terry Bogard) have disappeared to give way to new ones, which in turn may have a prior relationship to the plot (like Rock Howard or Kim's children) (as Bonne Jenet). The fighters keep similarity in their styles of combat with several previous personages of other titles.
The game was a response from SNK to the exit of Street Fighter III, with which it restores many similarities in regards to renewal of characters and combat style.

Garou: MOTW tried to make full use of Neo-Geo's graphics capabilities. Although the machine was unable to render 3D graphics, the game uses several advanced 2D techniques to try to produce the sensation of the player in a "real" 3 dimensions. The sprites and detail of the characters increased and was used the engine of the game The Last Blade 2
SNK also introduced a collision detection system that improved gameplay as well as new features introduced into the game system. On the other hand, the sound used used compositions closer to the electronics, and the design of all the characters had been more stylized than in other editions, approaching sometimes that of anime characters.
The arcade version has only the History and Versus mode, while the console version includes a survival mode and training mode.

It is a 2D fighting game similar to other Fatal Fury installments, but it has several peculiarities that affect combat. The game uses the system Only defense (similar to the parrying of Street Fighter III), consisting of covering itself just at the moment of receiving an impact. By doing this, a small portion of the energy is recovered and a counterattack can be made.
It also introduces the T.O.P (Tactical Offensive Position System) system that consists of choosing one of the three parts of the energy bar (upper, intermediate or lower). When in full fight you reach the chosen part, the character shines, and if it is damaged, it regenerates its energy. You also have a special attack assigned to a simple combination of buttons, C + D (in the arcade version).
Finally, there is a special movement bar with 2 stages: a first one whose effect is not very powerful, and another in which the most powerful attacks are made. This bar fills up as special skills are realized, damage is received or the "Just Defense" system is performed.
In the arcade version if the player loses a bout and wishes to continue he has the possibility to choose (or not) a handicap that can make it easier to pass the stage.

Description of characters and their respective seiyuu in the Japanese version: