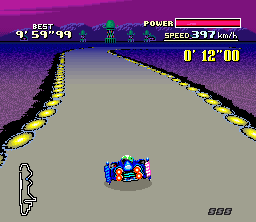 Genre: Racing / Driving
Perspective: Behind view
Vehicular: Hovercraft, Track Racing
Setting: Sci-Fi / Futuristic
Published by: Nintendo of America Inc.
Developed by: Nintendo Co.
Released: 1991
Platform: Super Nintendo (SNES)
F-Zero, racing series from Nintendo, by right is one of the best and original representatives of the genre racing. Well, where else can you make a dead loop at a speed of 1200 km / h?
Futuristic themes, crazy speed, aero-mobile, typical for all royingsov on the SNES engine - that's what F-Zero consists of. It seems to be nothing special, but how exciting! After all, racing at a frenzied speed along an absolutely flat track (there's nothing to be done - SNES is not N64 for you), you forget everything except that you need to overtake another 7 airmobiles to the finish. Yes, the gameplay is exciting, there's nothing to say. In the game we have four cars, whose characteristics depend on two parameters - weight and acceleration, which can acquire any values ​​depending on our choice. The graphics are not bad, the tracks look just stunning, by the standards of SNES, and how it looks like it's almost a live city under the track! Music is not inferior to other parameters, melodies are varied and pleasant on hearing.
Seven years have passed, and Nintendo released a sequel to the beloved F-Zero. In due time F-Zero X simply shook imagination. 30 (OMG) characters to choose from, a bunch of different tracks (from rally round plates, to some pipes) and an excellent soundtrack attracted a huge number of people to the game.
Let's take a closer look at the gameplay. From the first part of the game, the ability to customize the characteristics of your car and some of the tracks has migrated. From the transition to 3D, the tracks were simply magnificent: now we ride not only along flat routes, but also inside pipes, outside pipes, fly above and below the pipes (Oh yeah! Now we can fly!), Twist dead loops and roll in a spiral. Sensations - no worse than on a roller coaster. In the game, in addition to remaining from the first part of the characters, added 36 characters, painted in the style of American comics. The graphics in the game does not hold out to the ideal n64, but the model cars look very pretty, however, as well as the tracks. The music retained the former charm of the melodies from the original F-Zero, which were painstakingly transferred to the sequel. In general, the game turned out to be extremely interesting and high-quality.
‹
›
Home
View web version