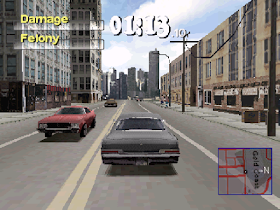 Genre: Racing / Driving, Simulation, Open world driving
Perspective: 1st-person, 3rd-person
Gameplay: Vehicle Simulator
Vehicular: Automobile, Street Racing
Narrative: Crime
Published by: Infogrames
Developed by: Reflections Interactive Limited
Released: 2000
Platform: PlayStation (PSX, PS1)
This is a continuation of the game Driver which was accepted by the players with delight. The new version of the game, above all, is distinguished by the appearance of brand new cars: a luxurious classy Mercedes, a magnificent Cadillac and an excellent Chevrolet. In addition, there are fire trucks and ambulances. All cars are made in a magnificent schedule, because for this purpose, three times more polygons were used than in the first version of the game. Levels are detailed, city landscapes are extremely realistic, and shady avenues literally lure you, and not in vain. In most of them you can find a shorter route and deftly cut the corner. The levels and stages are much larger, and if you look at the map of the city, you will see that it is fundamentally different from the map of the first game. It does not have the character of a rectangular lattice, but has very complex, winding and extremely difficult tracks. I must say that it's very difficult to get from one end of the city to another, literally full of policemen and other obstacles, and often your car can get very serious damage. Then you can jump out of your car and quickly run to another. In addition, you can perform a number of other actions on your own two. For example, to get through some underground tunnel or go down into the subway, press switches or open secret hatches and through them to escape from the pursuing policemen. There is even the possibility of blowing up some bombs. The two-player mode looks just fine. You and your partner play numerous mini games. Some of them resemble the well-known genre of policemen and robbers on a horizontally divided screen. At the same time, the quality of the graphics of the game practically does not deteriorate. Video inserts look great, which in themselves make an impression of just a movie, and an adventure gangster movie. It seems that this game will delight all fans of the genre.
Interestingly: Soon after the start of the sales of the game Driver 2 Infogrames (Atari) released a Limited Edition containing a revised version of the game, which was sold in a different package and usually with some additional product (for example, with a memory card). This version was much more expensive and had a limited edition. The reason for the release of a limited edition: the fall of FPS (frames per second) because of what the game periodically slowed down and lags.

Leave the "flying" car: Click Triangle + Up when you are driving and jumping. You will jump out of the car, and he will continue his movement further at full speed. This technique can not be performed if the police are chasing you.
Ability to relax: Click Triangle next to the chair. After your hero sits down, click the Analog-stick button to change the camera's viewing angle.
Quickly stop: Click Triangle + Circle.
Fast turn: While holding Left or Right, press Triangle to make a sharp turn in any direction. In the same way, it's easy to make a U-turn.
Put an overturned car: While holding the Circle, alternately press Left and Right to put the car on the wheels.
Steal a police car (Chicago): Go to Grant Park, explore this area and see a police car in the side of the park. Get out of your car, steal a police car in the same way you steal and other cars. In addition, in a similar way you can steal a police car at the level of Havana.

How to get secret cars

You probably remember the yellow car with black stripes, which drove Driver 1. Now you have a chance to ride it again. When you are in Chicago, go to the urban area, which is called Wrigley Town. It is located in the upper part of the city. Look for the stadium Chicago Cubs Stadium (Wngley Field) and in one of the corners of this stadium you will find the door, in the upper part of which the word tickets (tickets) is written. Go to it, click the Triangle button and you will see 'four doors. Try to open them all. When you get to the right door, the gate in the opposite corner will be open, and you can get into the secret zone, go straight into the stadium and go out even on the field. Get out of your car and go up the stairs to the hall, which will take you to the underground garage, where your new car is standing!

To find a very nice speedy mini car, painted in pink and white, start in Havana, click the Start button and go to the map. You will see the road near the tunnel, go down it and find yourself in the underground garage. To open the gate, press the switch to the right near the trees. You will find yourself in the secret zone when you pass through the opened gate. Inside the road that leads to the ground. Go down and see three roads to the left. Take the last one and go to the big car, turn left, then to the right and left of you will see another road that will lead to the mini-car. Click the button on the wall at the back of the room, and the platform on which the car is located will lower. You can get into the car, and the platform will lift you to the surface. Now the "mini" is at your service.

Remember the truck that went to Las Vegas in the game Driver 1? So, in the second version of the game you can find a very similar blue car. From the start, take the road Paradise Road and follow it down until you reach the road Flamingo Road. Then turn right, and when you pass a little, turn left into the first turn. Take this road down and on the sixth road turn left. Move along it and stop when you are at the intersection, where there is a choice: go straight, right and left. Go left and find yourself near a building with a large gate on either side. The right gate is ajar, and when you enter them, you will see the switch on the left. He opens the left gate, and the blue truck is behind the warehouse right in front of you.

Want to ride a very pretty Semi? You have such a chance. When you are in Rio, press the Start button, go to the map and in the upper west corner you will see a small hill on the road. Go straight in the middle of this hill and you will see a building with a gate in front of you on both sides. Get out of the car and find the switch on the right. He is on the front of the building and slightly disguised, so look more closely. After activating the switch, open the gate to the left of the building. Go in them, turn left and move on. Find a very pretty Semi behind the building.

After you find a secret car at the Las Vegas level, return to the street and drive left, turn right into the first turn and then straight ahead, then turn left and, when you go outside, look to the right. You will see a wooden barricade between the building and the wall. Go straight through it, then through a small alley and you will see a slope through which you enter the secret zone. There are only four secret zones in the game:
Chicago: the Wrigley Field.
Havana: The Underground garage.
Los Vegas: the area of ​​the Construction Site.
Rio: The very place where you got the secret car Semi.
Anton TonskiyMarch 14, 2018 at 12:17 PM

You will find this trick in Las Vegas. To get it, go to the corner of Tropicana and Mid Strip, directly to the MGM Grand Casino, near which stands the statue of a large lion, and then turn north and look to the right. One block below you will see a long building (black with blue), at the top of which are brightly lit advertisements. On the big glowing signboard the word Bingo is written, turn to the left of this signboard and you will see a switch between two black doors.

This trick is found in Rio. First turn around, drive straight and turn right after four blocks. Continue along this road and after another four blocks turn left. On the right we see a huge building, and next to it is a small building, on top of which there is a barbed wire. Go up to this building and you will see the door; go to her, press the Triangle button, the door opens, go inside and you will see the garage door. Open it and face the large building. Go to the door at the far left end, press the Triangle button, and the Immunity trick is at your service.

In the start menu, press and hold R1 + R2 + X + Circle and you will hear the sound of the car running.
‹
›
Home
View web version