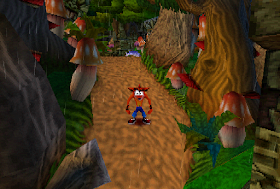 Genre: Action
Perspective: 3rd-person
Gameplay: Platform
Published by: Sony Computer Entertainment America
Developed by: Naughty Dog
Released: 1997
Platform: PlayStation (PSX, PS1)
Crash again returned to the PlayStation screen! Since Crash Bandicoot became one of the most popular and favorite games on the PlayStation, it's no wonder that this story got a sequel. In Crash Bandicoot 2: Cortex Strikes Back, you can select levels in random order (and we did this in the first series!). Improved the quality of graphics, animation, sound, many impressive lighting effects. Sam Crash has mastered many new tricks, knows how to crawl, climb up, hang and swing. There are also new attacks that will help to deal with the half-witted Dr. Cortex and his cronies. The doctor miraculously escaped in a balloon (in the first game), which is now hidden in a deep cave, where Cortex is plotting new mischief. Crash must penetrate the cave and deal with the doctor once and for all.
Dr. Neo Cortex is going to destroy the whole world, no matter how many, but if our hero manages to find 25 crystals, then the world can be saved from the terrible Dooooom! Or does it only seem to him?
In Crash Bandicoot 2: Cortex Strikes Back more levels than in the first version, more diverse landscapes and territories. Crash falls into ice caves, rain forests of the jungle. He even has a portable (like a backpack) rocket engine, on which one can fly in space. Perhaps the weak (and only!) Place in the game is bosses. They look just fine, but their military equipment and tactics can be guessed very easily, so they will not be able to win much over them, and will not bring satisfaction.
A huge leap occurred in the graph. The character of the game has changed, due to which all objects and enemies are very clearly visible. The quality of animation has increased, especially in Crash. When, for example, he escapes from a huge snowball, he turns back, his eyes are wide with terror. And when walking on slippery ice, the face is warped with a grimace of frustration and frustration. Just die from laughter when Crash stands on the edge of the platform and tries to keep his balance.
Now our hero knows how to do a lot of new things. Of course, he still jumps and runs, but knows how to slide, clamber and "clap his belly" ... And this is very useful, both from a destructive and constructive point of view. But the main thing is that with his belly (Belly Flops) he can finish off a strong opponent, break the floor and smash the hard-to-reach boxes into tatters.
In principle, the game is 3D, but is perceived for the most part as "flat." Crash can go anywhere, but the levels are so organized that this ability is practically not used. In fact, it is moving from point A to point B.