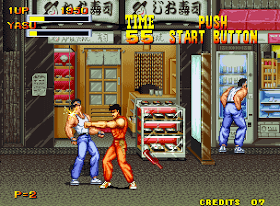 Genre: Action
Perspective: Side view
Visual: 2D scrolling
Gameplay: Beat 'em up / Brawler
Published by: SNK Corporation of America
Developed by: SNK Corporation
Released: 1991
Platform: Neo-Geo
Burning Fight is an arcade game of the beat 'em up genre, released by SNK in 1991 for Neo Geo MVS. Burning Fight. Was introduced to compete in the market against popular genre titles in that time as the video game of Technōs' Double Dragon, one of the leaders of the genre in time. Three years after its launch in the arcades and in the Neo Geo AES, it was released on the Neo Geo CD.
The game is produced by Eikichi Kawasaki, one of the founders of SNK and the man who has been behind several company titles such as the Fatal Fury series and Samurai Shodown.
Later it was relaunched in the compiled SNK Arcada Classics Vol. 1, which appeared for PlayStation 2, PlayStation Portable and Wii in 2008.

Burning Fight follows the formula and concepts commonly seen in titles of this genre, such as Double Dragon or Final Fight: selection of balanced character, objects and weapons found in the cause of land damage to opponents, and semi-interactive environments (players can damage objects like telephone booths and street signs along the way). The game is placed in a fictional version of Osaka city (during a train station scene the platform even shows a "Umida" station signal).
there are three selectable characters, each with their own levels of strength, agility and special moves: Ryu is quickly but weak, Billy is slow but very strong, and the duke is a more balanced hitter. An element that helps the game stands out from its competition is mini-stages, where the player has to defeat some enemies in period to scant time to win prizes.
The antagonists are members of Heiwa-Gumi, a Japanese yakuza gang, even though there are a few Caucasian bosses and mid-level bosses (including two wrestling characters modeled after Hulk Hogan and Randy Savage), and the final boss is Italian mob chief Castella (Casterora in Japanese). In addition, the game has no individual endings, no matter what character has been chosen. After defeating Castella, players are presented with several scenes of the game along with the credits, and finally a group box of the main characters.

While Burning Fight was a success in criticism, receive a lukewarm welcome by followers of the genre. The lack of popularity directed the game to fail to have the impact SNK expected for and Burning Fight lagged behind its best known competitors. Sinclair The user highlighted this sense of solitude by giving the game an index of 74 and declaring that, "Burning Fight is a competent journey along the beat-'em-up camilo ..." With a regular gameplay and having "no props at all".
‹
›
Home
View web version