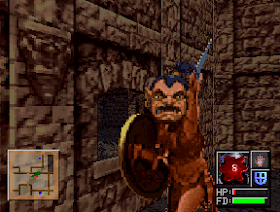 Genre: Action, Role-Playing (RPG)
Perspective: 1st-person
Setting: Fantasy
Published by: Strategic Simulations
Developed by: Lion Entertainment Inc.
Released: 1994
Platform: 3DO Interactive Multiplayer
Advanced Dungeons & Dragons: Slayer - a fantasy role-playing game with a first-person view, using the rules of the second edition of Advanced Dungeons and Dragons. 58-page manual immediately makes it clear that the developers are not joking. Even if you have not previously been familiar with the D & D universe, nothing will prevent you from learning the rules, bestiary and embark on a journey. A distinctive feature of the game is the customizable dungeon generator of the castle, which means that each time a new game is launched, new adventures are guaranteed, relics search, violence with creepy inhabitants and everything in the same spirit. The flexibility of the settings allows you to choose the optimal complexity, so as not to resort to cheats and even more enjoy the gameplay. In Japan, the game was released in 1995 and was called Advanced Dungeons & Dragons: Lost Dungeon.
The game was met ambiguously. On the one hand, in technical terms, it is very advanced. All monsters are so coolly drawn and animated that being essentially 2D, at a distance they seem completely voluminous. Huge dungeons are very atmospheric, and only not quite obedient control (maybe the case in the emulator?) Does not allow to plunge into the research with the head.
True D & D fans are frustrated with a small number of parameters that can be selected before the game starts. These are the standard characteristics of the character: Strength, Intelligence, Wisdom, Agility, Complexity and Charisma. Nevertheless, the game is considered more successful than the continuation (Deathkeep). Sex and personal qualities do not affect the gameplay much. But the race (elf, half-elf, dwarf, dwarf, halfling, man), gives the possibility of choosing a certain class of the character. So - the game clearly deserves your attention, although, for hardcore players, it may seem boring, not everyone will like to rummage through the dark alleys for hours, find artifacts, change clothes regularly, and so on. Do not forget to use the card.

Select the desired line in the menu by pressing A. Then select the hero (→ / ←) level of difficulty, and start "Plow".
The lower right corner shows the energy of the hero, his weapon (it is lit if it is possible to shoot) and defense. In the lower left corner is a map.
And - to strike with a sword;
C - open the door;
C + R - squatting;
C + L is a map that appears as the passer-by
tion;
L + ↑ - look down;
L + ↓ - look up;
P - list of ammunition (output - again P). To change weapons, move the cursor in this mode to the corresponding cell, press A (the cell will change color), move the frame to the cell near the hand and again press A.