The Lost Files of Sherlock Holmes (3DO) 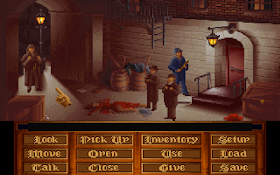 Genre: Adventure
Perspective: 3rd-person
Gameplay: Puzzle-solving
Interface: Point and Select
Narrative: Detective / Mystery
Published by: Electronic Arts
Developed by: Mythos Software
Released: 1994
Platform: 3DO Interactive Multiplayer
The Lost Files of Sherlock Holmes is a very high-quality game about the adventures of Sherlock Holmes for Panasonic 3DO. Initially, the game was released for the PC - DOS. But in a few years it was improved and published for the game console 3DO Interactive Multiplayer. It can be seen that the game is made with love, even the smallest details are very well worked out. This is the first game in the series "Lost Files of Sherlock Holmes" - "The Case of the Serrated Scalpel." The game takes place in 1888 in foggy London, in the backyard of one of the theaters near the black entrance waiting and killing the popular actress with a serrated scalpel. Although around this time in the city manages the nickname "Jack the Ripper" known for his brutal murders putan. This case is entrusted to investigate the detective and detective, who has already earned his fame in Scotland Yard - Sherlock Holmes. This is not a simple and confusing matter, which he will have to reveal with his friend and colleague Dr. Watson. And we have to help him. This is an exciting game in which we have to cling to the details and look for clues.