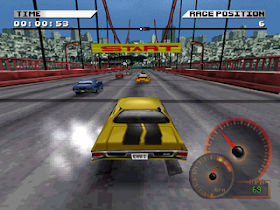 Genre: Racing / Driving
Perspective: 1st-person, Behind view
Gameplay: Vehicle Simulator
Vehicular: Automobile, Street Racing
Published by: Accolade
Developed by: Pitbull Syndicate Limited
Released: 1997
Platform: PlayStation (PSX, PS1)
The game features street races on several routes, based on existing cities. At the choice of the player provided 14 cars of famous manufacturers, as well as several modes of competition in single or multi-user version.
After the release of Test Drive 4 received mixed, but mostly positive feedback from the game press. Critics have praised the variety of cars and tracks, but the shortcomings are management and music. In 1998, the sequel - Test Drive 5 was released.

Test Drive 4 is an arcade autosimulator, performed in 3D graphics.
The game has several different modes, including a single race, championship and drag racing. The game has 6 tracks: Keshvik, San Francisco, Bern, Munich, Kyoto and Washington. There are 14 licensed cars from world famous manufacturers such as Dodge, Chevrolet, Nissan and others, as well as an additional non-licensed Pitbull Special, which is a modified Rover Mini and opens after winning all races. During the race, the police can follow the order on the road; if the police car is ahead of the driver's car, it leads to his detention. In the version for PlayStation there is a multiplayer mode for two players by connecting two consoles with a special cable, and in the version for computers there is also a network game for six players.

The development of Test Drive 4 was conducted by Pitbull Syndicate, which joined Accolade, the publisher of the series. Compared with the previous parts, in the new game the concept was changed: instead of racing on picturesque country roads in Test Drive 4, competitions take place on city streets, the game itself acquired a more akrad style, but the management of cars is balanced between realism and accessibility, and a detailed description of the characteristics models in accordance with their real counterparts preserved. The soundtrack in Test Drive 4 contains songs in the genre of electronic music from bands Orbital and Younger, Younger 28's. The game was also shown at the E3 1997 show.

Test Drive 4 received versatile, but mostly positive reviews from critics. On the GameRankings site, the average score is 71.32% for the PlayStation version and 69% for the PC version. At E3, the auto-simulator received the award in the nomination "the best racing game of 1997".
The reviewer Jaz Rignall from IGN left the game as a whole a positive review, estimating it in 7 points out of 10 possible. Criticism liked the variety of trails and cars; Techno-music in the game was called "boring", but sound effects, according to the reviewer, save the situation. The main disadvantage of Rignall noted the sensitive and inaccurate control, especially when seen from the first person, but in conclusion Test Drive 4 was called a "good, but not excellent" game.
Glenn Rubenstein from the GameSpot site put the game 5.5 points out of 10. Despite the preservation of the game features of the previous parts, beautiful graphics with "smooth" animation and a variety of cars, the critic was disappointed in the management, elaboration of the tracks (but noted the merry race through the streets) as well as the secondary nature of the gameplay, in comparison with other racing games, but about the soundtrack responded as follows: "Music is also dull, unable to cause any excitement".
A representative from Game Revolution, in contrast to his colleagues, spoke positively about the difficult, realistic management, and also praised the game for its pleasant graphics, "clean" sound and fun tracks. According to the critic, "in Accolade the genre of racing games was elevated to a new level", "not so bad music", a variety of routes and high complexity were noted. Among the minor disadvantages in the review are some narrow sections of the trails and unrealistic collisions.
Scott Alan Mariott, a critic from AllGame praised the detailed graphics, the number of modes and style of the game, but also said that music is disappointing, and management should be improved somewhat.

Premium cars and "mirror" tracks:
Note. To activate these codes, you must perform the following procedure.
Enter the Drag Race and select "Jaguar". Go through the route, and if you show a good speed, the computer will "ask" for your name. Enter one of the codes (passwords). If the music is off, you will hear how the commentator will say Go! After entering the codes, make sure that the game is saved in the memory card. Otherwise, you will have to enter the codes every time.

Here are a couple of tricks that will be useful in Single Race mode. Go through the track, get the result and record in the "statistics". Better to choose the race Drag Race, it's the easiest.
Now enter the WHOOOOSH password instead of your name. Each time when you race a horn (ie bibikat) during the race, the Nitro Boost will turn on, and your car rushes forward, You can just go on "one hooter"!
If you enter the password MJCIM.RC instead of the name, then in Single Race you can race on small radio-controlled cars.
‹
›
Home
View web version