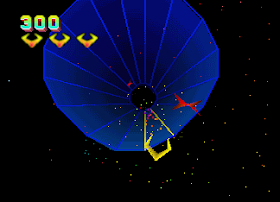 Genre: Action
Perspective: Top-down
Gameplay: Arcade, Shooter
Published by: Atari Corporation
Developed by: Llamasoft Ltd.
Released: 1994
Platform: Atari Jaguar
Tempest 2000 is a remake of the classic 1984 game Tempest. The new game is different with new game modes. Superb 3D graphics and great music. The game has three classic game modes, a new mode with improved graphics and new chips and a two-player mode. It looks all awesome, one of the best games in the genre for Atari Jaguar. This game should support a special joystick (Jaguar rotary controller). Similar to the original control from the original Arcade machine. But these controllers Atari for Jaguar never released, although there are prototypes. The game has support for this type of management, it's a kind of Easter egg, which can be called up using a special code.
‹
›
Home
View web version