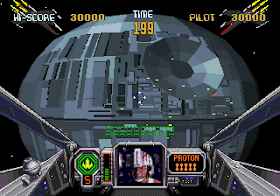 Genre: Action
Perspective: 1st-person, Behind view
Gameplay: Shooter
Setting: Sci-Fi / Futuristic
Vehicular: Space Flight
Published by: LucasArts, SEGA of America
Developed by: SEGA Enterprises Ltd.
Released: 1994
Platform: SEGA 32X
The arcade space shooter Star Wars Arcade in the style of Star Wars, is executed completely in 3D. The gameplay is slightly similar to the game Star Wars, made by Atari. But now the game has become really 3D, and this means that there is freedom of action in three planes. You are a pilot of one of the ships X-wing or Y-wing. You have to perform various tasks: intercepting TIE Fighters amongst asteroids, destroying the Super Star Destroyer and attacking the Death Star. The game has how many game modes including Arcade and 32X.
‹
›
Home
View web version