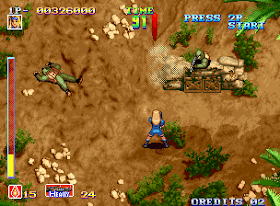 Genre: Action
Perspective: Bird's-eye view
Visual: 2D scrolling
Art: Anime / Manga
Published by: SNK of America
Developed by: Saurus Co.
Released: 1999
Platform: Neo-Geo
This is a shooter with a top view. Here you act as eight soldiers who carry out an important mission to destroy enemies. You can play the game either alone or together with three allies. Each hero, in addition to conventional weapons, still has his own unique weapon. In close combat, a knife is used. The successful physics of the game conveys well the volume of some objects. Graphics really high-quality and well combined with beautiful special effects. Many objects around can be destroyed. The battle takes place in beautiful locations.