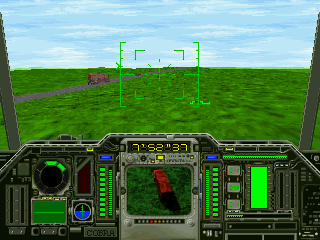 Genre: Action
Perspective: 1st-person
Vehicular: Helicopter
Published by: Panasonic Software Company
Developed by: Genki Co.
Released: 1995
Platform: 3DO Interactive Multiplayer
So much has already been done on this subject that it remains only to be drowned in heavy agony, contemplating another lop-eared machine proudly dissecting the heavenly expanses in the hope that somebody small and stupid suddenly appears on the horizon and immediately lands under tons of good shells - although the pen on the trigger is tired to put pressure, but without this we can not - we are the bulwark of our peace-loving policy. Why are so much attention paid to helicopters? What is so special about them and exceptional? I do not know, and I do not want to know, but get another helicopter shooter. Now you can not continue to ignore the most pressing issue on earth: a direct descendant of the unforgettable AIR CAVALRY will force you to compulsorily love, respect and honor these bad pieces of iron. Now, with the arrival of the Cobra on 3DO mercy do not wait. Helicopters do not know the sense of proportion.
In short: flying-shoot-killer in all its gloomy glory. At the beginning of the game, you see a map with six points: five of them are missions that are suitable for execution, and one is a training mission. After selecting the field of action, listen to a fairly intelligible lecture by your High Chief about what you need to do. He says everything, but the general meaning of his utterances is this: destroy, they say, a tank immense and unmeasured, or someone else; protect the peaceful transport, carrying weapons, from encroachments of enemy forces; keep the defense of the city (in one snout!) - it is attacked by tanks; knock down fighters, launched from large aircraft carriers. and all in the same spirit.
Joyfully giving one of the above messages, he shows you a map of the area with the mission object, enemy forces, fueling points and reloading weapons. and here you are, inspired by the bright prospect of surviving in this swamp, bravely bursting into battle. How does it look on the part of the player?
View from the cockpit. Well done landscapes - all kinds of hills, plains, oceans - all very much like SHOCKWAVE. You fly, guided by a small radar, which completely does not meet its high function - after a couple of minutes of flight, there comes a period of complete disorientation. True, the radar screen sometimes shows the face of the commander-in-chief, who swears; and curious 3D pictures with objects of the mission, which in your oversight beautifully explode.
During your flight, it's not at all superfluous to sometimes use some gizmos, which you have been endowed by mother nature and stalwart gunsmiths.
These subjects include:

All this is given for no reason at all - some bastards in you are constantly shooting; then they will offer a glorious machine-gun turn, then homing homing
racket ... What to do, you have to perform monstrous maneuvers to avoid this terrible scourge, while still further disorienting yourself Some levels
can quickly eliminate this problem, because they have clear, memorable objects.
But on some you can easily get lost (as, for example, on the first), and lose precious time. During the operation, it is sometimes necessary to replenish depleted supplies of weapons and fuel, which occurs during a slow flight over a special tanker-tanker. If for some reason
Your mission has not been successful - the commander will scold you in a friendly way, gently tell you where you made a mistake.
Control - quite simple and adequate means of transportation, but at first - quite unusual. The level of complexity is quite decent, but not the steepest; graphics and music is quite on the level, very well made video inserts before the beginning of each level, describing the glorious periods in the life of helicopter troops.
The game is nothing in the sense of engaging in a period of mighty depression - all such victorious and life-affirming. but if you approach from a professional point of view. no, it is better not to approach.

Choose the territory of one city and stay in it. Keep machines with ammunition protected and use missiles to defeat targets. Densely grouped tanks destroy with napalm.
Fourth mission
Enemy jets are waiting for vehicles with equipment. When there is a three-minute warning, watch for two aircraft. To destroy each of them, two missiles are required.

Select four land objects. Approach the rocket carrier and destroy it. Go back and defend the base. Circle over cars with weapons. Carefully observe the angles of the radar behind the directions of approaching the enemy. Let him approach, and then destroy.

Go to the goal, not paying attention to other enemy objects. Avoid the missiles flying into you. After destroying the building, go to the secondary objects. To guide the target, invisible to the radar, use the green indicators on the compass.

Quickly fly to the building of the prison, not paying attention to enemy equipment and aircraft. Circle above the prison, destroy all the obstacles that have appeared, and then fly away in any direction to cross the border and finish the mission.