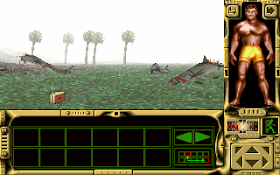 Genre: Adventure, Role-Playing (RPG), Simulation
Perspective: 1st-person
Setting: Sci-Fi / Futuristic
Narrative: Survival
Published by: ReadySoft Incorporated
Developed by: Silmarils
Released: 1996
Platforms: 3DO Interactive Multiplayer, DOS
Your hero is on a planet that can not be studied normally until the end.
After the release of this game, the authors tried to repeat the "success" of the first part and released Deus. The game was released only on the PC, where it failed victoriously. I at one time wrote a mocking review on it, which the game deserved for 100%. Those. if the transitions between the climatic zones in the "Robinson" were mitigated by caves (from the tropics to the tundra), then in Deus it was like a built heating main under certain areas. The snow just started abruptly, flora and fauna immediately followed. Those. already ten meters in the winter zone you could meet a saber-toothed tiger, although a minute ago you observed something warmth-loving. Questions to Deus was too much, but because the game failed on all
parameters. Even a hardcore like me could not play this for more than two hours.
Yes, back to the "sick". The name very clearly defines our further existence. If Robinson had a Friday, even after a very long time, then people are almost at every corner. Only their mood frightens them. If the first person is just a psycho who has to be slaughtered, then the second person turns out to be a werewolf. And it's not a spoiler. This is the first five minutes of the game. You will still cut it anyway.
Robinsonade is supported by a real medical box. This box is almost the most important device in the game. They fell into cold water - aspirin, poisoning - inject some kind of crap, water from the lake - detox, tired of living and playing - cyanide. Yes, there is potassium cyanide in this game! A joke from the developers.
About the script, I already wrote, but that's about the atmosphere did not have time. In this world, with all its shortcomings, I want to spend a couple of evenings. Yes, I do not want to live here. Although, after the main character's replay on the storyline (if there is one), you can safely send probes, later gondolas with live engineers, and later the first settlers. There will be another planet-trash. Socium and garbage in the human sense are equal ("one and the same").
The authors managed to maximally break the general picture on the flaps of fantastic templates. Not only are we present on the planet-prison, which is not originally such, so we still have to fight with the local fauna, which often refutes all the laws of genesis. The authors needed to create a diverse world, so they wanted to spit on the laws of nature. Moreover, their "sandbox" was not so great, and therefore different ecosystems had to coexist side by side, not knowing about each other. As already mentioned above, these systems are connected only by caves, which themselves also become a hell for the mind of an experienced speleologist. In some caves hairy monsters thrive, in other crawls fatty lizards, and in the third settled pterodactyls, ready to poke their eyes with their beaks. After the fantasy-fantasy-paleontologo-zoological absurd, you suddenly recall the works of Jules Verne. But he would also have laughed at this feast of templates, in which he partly took part.
This game was just right to become a turn based RPG - so all the action is broken into squares. But realism requires its own - and its producers.
In conclusion (yes, in conclusion) I want to say that this is a game that I went through several times. I love her so much. I treat France with warmth. Happenes. But the atmosphere is created! Be afraid to make! They did what many directors thought for years.
They created the world! Let the stupid and illogical, but the world in which you want to survive! Give me examples of other worlds where you also want to live and survive.