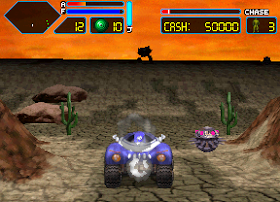 Genre: Action, Racing / Driving
Perspective: Behind view
Gameplay: Shooter
Setting: Post-Apocalyptic, Sci-Fi / Futuristic
Published by: Crystal Dynamics
Developed by: Crystal Dynamics
Released: 1994
Platform: 3DO Interactive Multiplayer
Someone let in at one time a phish, characterizing the game QUARANTINE as DOOM on wheels. Not wishing to deviate from the proposed topic of analogy - I say that OFF-WORLD INTERCEPTOR is nothing else than TOTAL ECLIPSE on the same wheels, but only bigger, better and more terrible, because here you have to graciously roll out on monster action jeeps, while continuously pressing on the trigger.
The goal and goal of the game is to catch dangerous criminals living on the planets of the Orion system (seemingly). These ill-wishers have a filthy predilection for life on wheels, and are constantly rolled out over the surface of the celestial bodies temporarily controlled by them on huge and terrible punches, sometimes very armored (they can not be mentioned at all about what a self-respecting cosmic gangster will part with its nine hundred-millimeter recoilless?). In addition, the approaches to their rolling grounds are more than protected by an unthinkable number of automatic and not very combat systems designed to protect the boss from guys like you. The tough guys. Hunters for the award.
The awards are truly royal, and for them it's worth fighting a little. One difficulty: there are many hunters, there are few criminals. Therefore, a normal process of healthy competition is taking place, and you will have to, apart from actually trying to dump the Enemy, furiously fight off the same as you soldiers of fortune. Yes, you will have to operate with the help of a brisk jeep-terrain vehicle, trained to jump high, run fast and, quite importantly, to shoot accurately at everything that moves, does not move or has just moved (remember-remember, you will not deceive!). Such are the tricks.
The game gives you the opportunity to choose one of the two main modes of action - ARCADE and ORIGINAL (STORY). In the first case - for you all the worlds are open, you have everything, and as you pass you need to buy only lost lives, and new technology. The second option is much more complicated and interesting. Here your jeep is originally the deadest beast, and your main task is to stab up at least some significant amount of money to poke a gyroscope so necessary in the economy, steep tires and engine, hopper module, etc., etc., etc. Such the same chip and with the landscape - the game starts in a strictly defined place, and only in the process of overcoming one level, goes to the other.
And what about the game? And here's what: Your evil and bad animal is breaking through on the rough terrain, along the way trying not to fall down and at the same time in all the hollow of all its trunks
actively reducing thereby the surrounding population of vitally-cybernetic forms. Selects on the way all the various prizes, money, fuel canisters, pistols - power arms magnifiers, wrenches - eliminators of damaged injuries and so on.
And in the meantime a great many energy bundles are flying into it, from which he dodges without success ... for the time being. Thus, several zones are passed, and the apotheosis of this grandiose action is your meeting with the boss one on one (all the competitors tragically died not without your help). Forces, of course, are not very equal - the bosses are in the habit of being big. But with the due desire and skill they are still lying around. You get the reward - and immediately to the store. There you equip your vehicle with everything you can, if you want - you can buy another beast (I highly recommend the creature named V.V.SECTOR), and again - into battle!
The game is perfectly done in terms of graphics, completely torn off with TOTAL ECLIPSE, very fast and exciting. Absolutely absent usual for these games brake (meaning the slowdown of the program, not the control function), the level of complexity is very severe ... what else is necessary for happiness? I will say that: the possibility of a saves. But, unfortunately, it did not occur to the authors to endow the game with such a useful function, but ... well, all right.