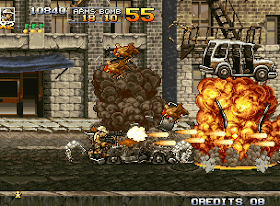 Added bonus system of scoring, which allows the player to be rewarded depending on how many enemies are killed for the allocated time. The allocated time is determined by the type of emblem that is selected. At the top of the screen there will be a time meter, and if the player resides to the end of the level, they will receive bonus points for badges that represent perfect exploits. Erie and Tarma were replaced by Nadia and Trevor.

A year after the events of Metal Slug 3, the world is trembling under the new threat of a mysterious but deadly cyber virus that threatens to attack and destroy the military computer system of any state. Tarma and Erie can not help because of their own assignments in this matter, Marco and Fio are called upon to investigate the situation, which is joined by two newcomers Nadia and Trevor. In its study, the group discovers that a rich terrorist organization known as Amadeus is behind a heinous conspiracy and teamed up with the rebel army of General Morden. They fight against the forces of Amadeus, hoping to destroy the cyber-virus, before he gets a chance to destroy the entire military computer system of the world.
Halfway through the game history mode, the player encounters what they are supposed to be General Morden, but in the final stage they find an underground object where androids like Morden are produced. Allen O'Neill (who has repeatedly appeared throughout the series) is the last time he fights with the player at this stage, and also discovers that he is a machine replicant. Finally, the player encounters the leader of Amadeus (who previously appeared in the past as a secondary witness, who made contracts with citizens and Nazis), who attacks a number of powerful robots, but he was defeated and trapped in his own devices, since the base self-destruction, presumably, kill him. If the player safely escapes from the explosion of the base, then before the credits will show that the team of heroes staged a victorious feast, but if the player gets into an explosion, the player's character will appear in the hospital, which were delivered to Yeri and Tarma. After the credits, one computer monitor of the computer transmits the data to an unknown location before shutting down.
‹
›
Home
View web version