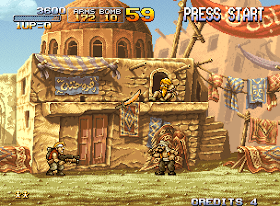 Genre: Action
Perspective: Side view
Visual: 2D scrolling
Gameplay: Arcade, Platform, Shooter
Published by: SNK of America
Developed by: SNK Corporation
Released: 1998
Platform: Neo-Geo
One of the most notable features of this sequel is the implementation of two more characters that, although controlled in the same way, added an element of variety to this title, as well as including a variety of new vehicles and the ability to transform into supernatural creatures or gain weight drastically changing the game pattern in some points.

The antagonist of the previous title, General Morden, has returned to assemble a considerable army after his failed coup attempt to establish a new regime of government around the world led by him and has become again a threat to the world order. The "Peregrine Falcons" squad formed by Tarma Roving and Marco Rossi, with the help of a new attack group formed by Fiolina Germi and Eri Kasamoto are sent to arrest him, but what they do not know is that General Morden has made a pact with a group of invading aliens (referred to as the "Mars People") in an attempt to facilitate their plans for world domination. However, during the end of the game the situation changes drastically, when the Martians underestimate the forces of the rebel army and betray Morden to carry out their own plans of planetary domination, leading the rebel army and the regular army to form a momentary alliance to put an end to the extraterrestrial threat.
The end of the game is inspired by the end of the film Independance Day (1996), in which A Mc Donnell Douglas F / A 18C Hornet crashes into the alien ship, in the game an Eaca Type B makes the same scheme in the which crashes into the bottom of the aliens' ship
The Eaca Type B is a Flying Tare with a change of color palette and a bomb instead of a missile, the original model was based on the Grumman F6F Hellcat, the Grumman TBF AVenger and the German Focke Wulf FW-190
Like the Flying Tara, the Eaca Type B carries civilian paint to prevent it from being linked in Germany with the Focke Wulf FW-190, the main German fighter of the Second World War, together with the Messerschmitt BF-109
Changing the difficulty of the game does not alter the end of it keeping the game in the difficult level, the phases, animations, programming of the characters, sprites music, time scenarios, and ending
The Ending has the music of mission 5, specifically the area of ​​the Suburban Railway (Metro).

The feel of the game was not significantly altered from the Metal Slug. It is the same game with many additional weapons, items, and features that fit very well in the animated and comic setting of the game. Nazca did much more of each destructible level, with a higher percentage of unnecessary destruction yielding profitable items. There are a total of six levels in the game.
With the chosen difficulty only changes the speed and resistance of the enemies while keeping their animations and attacks while the rest of the game (scenarios, time, number of missions and ending do not suffer changes)
90% of your animations and sprites (characters, vehicles and enemies) were recycled from Metal Slug 1.

Metal Slug 2 introduced the ability in the license for the characters to transform into different variants during the course of the game. The first transformation is in a mummy during the second mission of the game. Being reached by the purple breaths of the different mummies or purple vapors or vapors will trigger the transformation. This causes a drastic reduction in the speed of the player's movement and the cancellation of any special weapon, since you will only have one pistol. The mummy activates the gun at half normal, and it takes several seconds to remove a grenade. Another blow by the purple fog will cause the player, as a mummy, his deterioration and death. There are hidden antidotes across the level and left by the enemies that can return the player to his human form.
The ability to become obese was also introduced in this game. This transformation is gained, logically, by grabbing many food items during a mission. Once a lot of food is obtained, the character transforms radically. Slow down, but the attack of each weapon is altered: the melee attacks are changed from a knife to a fork (if you are crouching to a belt), the grenades are changed to larger bombs of comic style, and the current weapon is replaced by one that has larger bullets, increasing damage and may alter its characteristics. If you grab a bottle of dietary powder or it is a while without holding food object, it will return to normal. If they kill him, he will burst like a balloon.

Metal Slug 2 is the first game in the series to provide characters to help players in battle. The first is Hyakutaro Ichimonji, a prisoner who, when rescued, fights alongside the player who saved him, throwing self-guided energy spheres towards the enemy target, who, when you die, runs off the scene. Also appears Rumi Aikawa, a girl who appears on the screen carrying a huge backpack that drops maximum 3 items. If you do not reach it when you can, it will not appear as a score in the final scene.
‹
›
Home
View web version