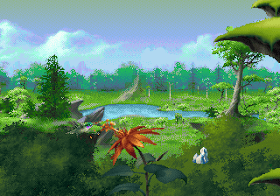 Genre: Action
Perspective: Side view
Gameplay: Shooter
Educational: Ecology / Nature
Published by: SEGA of America
Developed by: Novotrade Software Kft.
Released: 1995
Platform: SEGA 32X
The Kolibri is one of the most beautiful games for the Sega 32X. The game is a Shoot 'em up, in the game you play the role of a small bird of hummingbird, endowed with incredible power. Enemies in the birdies correspond to various insects, toads and chameleons. Once upon a time, an ancient crystal fell from the cosmos, which began to create life on earth and maintain a balance of good and evil on it. But in more likely to land fell one more similar crystal, it brought chaos and destruction, he began to destroy everything that had previously created another crystal, including absorbing its forces. But before the very destruction, a good crystal managed to give its power to a small bird of hummingbirds. And now it is to restore the balance of power on earth. For this, she has a good arsenal of various weapons, which is gradually being improved. An infinite number of lives and health, which can be replenished with nectar from flowers. A wonderful game with beautiful graphics and smooth animation.
‹
›
Home
View web version