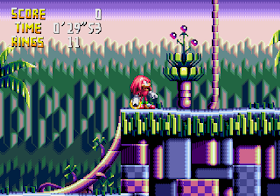 Genre: Action
Perspective: Side view
Gameplay: Platform
Published by: SEGA of America
Developed by: Sonic Team
Released: 1995
Platform: SEGA 32X
Knuckles Chaotix is ​​the sequel to the Sonic the Hedgehog series for the Sega 32X. Developed by the Sonic Team. Development of the game began long before the release of the most gaming console Sega 32X. Sega 32X gave the game new opportunities, and made the game even more interesting. The game is based on the build of the game Sonic Crackers, a later version of which, also had the name Sonic Studium and Knuckles Ringstar. And here and there was the name Sonic Crackers 32X.
The plot in the game is not simple, but also has regional differences. In the American version of the plot: Knuckles the Echidna guards the Carnival Island - an amusement park. There visits Doctor Robotnik, in order to steal the power of emeralds that control the whole island. He kidnaps Vector The Crocodile, Charmy Bee and Battleship Mighty the Armadillo and places them in the Combi Confiner. It's a freezer that he built. He wants to do the same thing with Espio the Chameleon but Knuckles prevents him. Knackles notices that with the help of the power of the rings he can release one of his friends, for a time. Now they all need to work together to save the island from the treacherous Eggman.
In the Japanese version of the game the plot of the game is slightly different: After some time after the events of Sonic & Knuckles, a mysterious island emerges from the water. Dr. Robotnik finds the island, and on it the mysterious Rings of Chaos are ancient rings that have accumulated the energy of Chaos Emeralds. In order to find the rings, he builds the base Newtrogic High Zone. Battleship Maiti, Chameleon Espio, Crocodile Vector and Bird Charmi arrive on the island, but they are abducted by Eggman and Metal Sonic and thrust into freezing machines. Echidna Knuckles also gets to the island, liberates Espio. They are going to stop Dr. Robotnik, that he does not get the Ring of Chaos.
Basically, the gameplay in the game is similar to the gameplay in the 2D game Sonic the Hedgehog. But there are many more labyrinths of similar levels. The main thing in the gameplay of the game is that in the game, two characters are linked together by energy rings. And they go inextricably. The second character is controlled by Ai. But you can tell him what to do. Basically the whole game is built on the principle of passing two characters. From innovations, now you can climb on vertical walls. And as there was a change of day, time of day and night. Also, the character can grow and decrease, with the help of various bonuses. There are rounds performed in 3D.
‹
›
Home
View web version