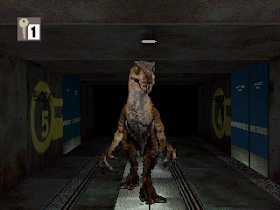 Genre: Action, Racing / Driving
Perspective: 1st-person, Top-down
Gameplay: Shooter
Published by: Universal Interactive Inc.
Developed by: Studio 3DO
Released: 1994
Platform: 3DO Interactive Multiplayer
Already from the title it is clear that once again you can not do without mentioning the movie. Of course, Jurassic Park is the same movie in which there were many, many different kinds of scary in appearance and habits resembling reptiles. This whole American love for a dinosaur can probably be explained by some lack of its own folklore, or at least its strong frostbite. The Chinese, the Slavs, again in Europe, in short, all had dragons. In the US, there were no dragons, just like his Loch Ness monster (if only because Loch Ness is in Scotland), so these dragons and monsters had to be invented. Of course it was not Spielberg who did it. Dinosaurs-cannibals appeared in American cinema much earlier, but Spielberg cultivated them in some way and as a result created neo-folklore, that is, American.
Naturally, Jurassic Park Interactive - the game on the above-named film and of course it did not do without dinosaurs. Dilophosaur, Velociraptor and Tyrannosaurus Rex are here. It would be strange if they were not. On the other hand, the game itself is unusual, and therefore special such a value dinosaurs in it have not even though they are key characters. Simply put, there is no complete game as such, but there are several mini-games. For example, in one you can shoot dinosaurs in some forests in an energy cannon, in another you can run from the dinosaur along the corridors (which reminds Demolition Man a little bit only without weapons), in the next one to drive a dinosaur from a furious dinosaur at night, etc. The overall goal of all this is naturally incomprehensible to me, as I certainly did not go through the game.
But I know that from the very beginning you are given at once several characters scattered on the map. You can see them with the help of such a similarity of the "operating system". At the same time in the same system you can see possible routes for each of the characters, as well as where any dinosaurs are found. In the same place (in this "operating system") there are several very mini-games (somewhere about five, if I'm not mistaken), they are usually unpretentious on the schedule, but you can play. There is even a semblance of the cult Galaga. However, whether this has something to do with the general line of the game, I also do not know.
To be completely frank, I tried to play seriously and thoughtfully for the last time in this work, about fifteen years ago. Then the game seemed strange to me, for a while I even thought it was just such a demo. I'm still not entirely sure what it was, but I think that there is some compilation. By the way, compilation is successful. In the sense that it is impossible to say, whether it is quite uninteresting. And graphics, and music in places it's even nothing. Shastat along the corridors, looking for clues and listening to the knocking of your heart, while behind you a dinosaur-killer is chasing, a feeling is not of pleasant, but adrenaline is how much. It was not possible to get used to it. More intimidating than Alone in the Dark.
On the other hand, that the impression after the game is not so pleasant as in the case of Alone in the Dark or at least with Alone in the Dark 2, if this impression remains at all. I already repeat tirelessly that under 3DO Interactive Multiplayer there were a lot of obscure games, and that's how Jurassic Park Interactive is fortunately, or unfortunately, one of them. It seems that attempts to document the project to the benefit still did not go. Although this is only my opinion, I probably did not understand much (and I do not cherish any special feelings for dinosaurs), and therefore play or not play, of course you decide for yourself.
‹
›
Home
View web version