Iron Angel of the Apocalypse: The Return (3DO) 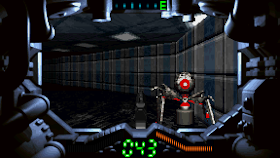 Genre: Action, FPS
Perspective: 1st-person
Gameplay: Shooter
Setting: Sci-Fi / Futuristic
Published by: Synergy Interactive Corp.
Developed by: Synergy Inc.
Released: 1995
Platform: 3DO Interactive Multiplayer
Previously, everything was better. Everything, except for the first part of the game Iron Angel of the Apocalypse. That's where there would seem to be horror. Not as scary as Cyberdillo, but still a very odd game. It would seem that improvements are useless to wait, but the developers dared to continue their offspring and released the second part of the adventure of a metal man a la iron lumberjack. And, what do we see? And we see that miracles happen and in the regiment of good action on 3DO Interactive Multiplayer replenishment took place, that is, Iron Angel of the Apocalypse: The Return took a very worthy place among such "primordial" shooters on 3DO as Killing Time, PO'ed and less first-born, well, much like the more cultured Wolfenstein 3D. Another thing, the thing is that this miracle for the broad masses probably still went unnoticed, which, incidentally, did not become less striking.
And, what actually amazed? Yes, in principle, everything. That is, it was corrected, probably the largest percentage of the minuses of the first part. The textures became more accurate, and after all the monotony of the textures of the first part was simply amazing. Now there is nothing like that. Do not say that directly DOOM, of course not, but everything is done in its own style and most importantly, that now there is a real sense of space. I'm keeping quiet about the fact that in addition to the textures added a bunch of special effects. Modest, but also tasteful. That is, the world now lives, at least you can live in it. However, in addition to you there live enemies, and they, too, have changed. First, they became smarter, secondly much more diverse, and thirdly, now there is no this maniacal pursuit of 3D, that is, apart from the barrel enemies, there are quite nice, albeit 2D robot monsters. And this is correct, because it will save the world, but about 3D, Dostoevsky did not write anything.
He did not write about the gameplay, but meanwhile there is progress. Single-frame movement has disappeared forever. No, the frames of course remained, but now you are moving much more flexibly and the game has become somewhat more active. Again, from the very beginning, there is already a map and even weapons. Yes, that there is a weapon. Unexpected generosity from SYNERGY Inc. - training. Yes, yes, you will have to learn how to move and shoot, albeit in a few hothouse conditions, but still. Again, weapons are different, and that there are weapons, there are also means of protection. If the memory does not fail me (after all, it's been about ten years), then the semblance of the energy shield was in the first part, but there it did not play an active role, and then you can control the shield yourself. And Tetsujin (yes, that same one from the first part, for him you continue to play as before), from a tin can turned really into a kind of immortal machine.
Remember the crazy Japanese? Duck here, he was killed without your participation, and the skyscraper immediately after the first part explodes into small pieces (do not be afraid, this is not a spoiler), and you do not need anything. Dug up, the dust was blown off and back into battle. But it's not so simple as it was in the beginning, there is already a real story and is tied up, he is at fighting terrorists. And what did they want there? Created similar ones androids and expected from them intelligent conversations about contemporary art? But the most important is how this is shown to us. From the combination of video + computer graphics have refused and now only computer graphics, but the videos are performed at a very high level and perfectly intertwined with the gameplay. True, the Japanese language disappeared, but there is music and music in the cutscenes is wonderful, I would directly listen and listen.
There are also mini-games. But this is quite cool, because even the normally executed gray corridors are still boring, and then immediately once and discharge. Almost at the beginning it will be possible to shoot robots in space just like in Star Wars. In combination with the foregoing, this is again a plus. The truth is true, too. For example, you can only save in special places. At first they just offer to be saved, and then they will have to look for special terminals. This is certainly not the only negative, but not about that in the end I would like to say. When I wrote an article about the first part, I did not play the second part, and therefore I assumed that the first one was created only to receive funds for something more. Maybe my assumption is wrong, but Iron Angel of the Apocalypse: The Return is really something great. Unique to 3DO, it deservedly has all the rights to get into the list of diamond games for this platform. Well, even if there is not such a list, it can always be made and I want to believe that with me regarding this game, you will completely agree.
‹
›
Home
View web version