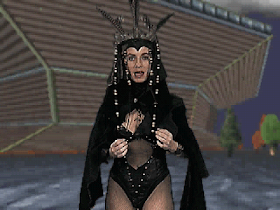 Genre: Action
Perspective: 1st-person
Gameplay: Shooter
Setting: Sci-Fi / Futuristic
Published by: Electronic Arts
Developed by: Five Miles Out
Released: 1995
Platform: 3DO Interactive Multiplayer
Immercenary - a futuristic 3D shooter with a first-person view, performed in MMORPG stylistics. Traditionally for the mid-90's, all the gameplay is accompanied by video inserts of medium quality. I just say - Immercenary I did not really like, but a few lines of chirrups worth at least out of respect for Electronic Arts, especially since for 1995 the game was very much nothing.So, in 2004, a group of scientists is seriously studying the virtual reality called "Perfection", which people created earlier. This is a kind of city of the future, in which you can travel through your astral projection. But something went wrong. Researchers going to VR, fell into a state of shock, and to withdraw from it until it was not anyone. The system could be simply cut down, but at the same time the last hope to return the consciousness stuck in the virtuality. Now we are forced to dodge from our dimension to the mirror like Immercenary number 5. The fact is that in one of the places of Perfection - the Park, where we are entering, we still need to "gain a foothold." And for this you will have to maximize your characteristics, dealing with non-fraging bots, ranking bots, and then with bosses. Eliminating the last obstacle, you can think of a general battle with the powerful being "Perfection 1", responsible for all the evil, and then cut down the system altogether.Yes, not only we are engaged in this wonderful mission. The other players have a similar goal - to swing and overwhelm the Perfection1. They are prisoners of the system, without the ability to get out while it is working. In the battle with Loki a girl named Raven will help a lot. She admits that she will not be able to finish what she started and asks her to destroy her algorithm. Only with her experience we will succeed and the prisoners will finally come out of shock.Every creature in the game has a rank that determines its offensive and defensive capabilities. We start at 255, and it will take a long time to grow, because Perfect1 has number 1, and you have to have number 2 to fight with it. So you'll have to beat rank "Rhythms", without forgetting to destroy their algorithms, passing through the remaining cloud. On luck, all kinds of power-ups and weapons are scattered around the Park, and specialized spikes can restore the characteristics, only, I do not advise doing this during a thunderstorm.In the central part of the Park is located DOAsys - a neutral zone where you can chat with other Rhythms on all sorts of vital topics, restore health, and even return to the laboratory. It is near this zone that at first it is worth hanging out, so as not to die at all times. What is interesting is that all dialogues are accompanied by a video series. Some rhythms are digitized images of people and are furiously distorted, others more resemble inhabitants of virtuality.Having dropped back into the laboratory (at will or after serious injuries), you can save-load the game and get some statistics. If we are "killed" - the characteristics decrease, it becomes more difficult to play, and then the meaning disappears altogether - the "end" comes. So it is necessary to remain. Rocking is on non-ranked "Goners", gradually switching to more unique residents. Yellow creatures add protection, red - attacks, and green endurance. Black steeper - they increase all three characteristics at once. The main thing is not to forget to destroy their algorithms. Kill a lot, as the characteristics grow very slowly. "Bosses" wear beautiful epic names, like "Medusa", "Tesla", "Balkan", "Silva", or "Loki". As soon as you approach their level - they can attack, but until then they will try not to touch the salad.

At the top of the screen are three lines. The yellow bar ("D" - Defense) shows vital energy and ability to protect, red ("O"=Offense) - the amount of ammunition, green ("A"=Agility) - the possible speed of your movement. If the green line is running out, you need to stand up a little, and it will increase. Two other lines are "fed" with cables (spiers) of appropriate colors. The blue cable replenishes both life and ammunition. To raise your D-O-A level, we need to destroy one "rhythm", recharge and survive. To save, go to any cable, press P and select return to the home lab - "Return to Lab".
Use the card (A + X). Laser light allows you to drive buttons B + C. To stop,
press L + R.
Immediately take a survey of the surrounding area and find out their capabilities. Your base is an oasis marked on the map by a white circle. Once you get there during the game, you immediately get rid of injuries and replenish your ammunition. Here you can talk to whom you will get, having received valuable (and not very) information. When you switch from the base to the lab, you can save the game.
In the garden you can find with a dozen different weapons. A reusable weapon is like a billiard ball, under which you have to go.
Destroy the enemy, be sure to encapsulate everything that remains of him. After 8-10 such murders, hurry to save the game in the oasis.
The storm is very dangerous, be careful. During it, all the ships are recharged and, if you sat down too close, you will get an electric discharge. It's better to wait out the storm in an oasis or. as a last resort, hiding between two buildings.

Lower substances live in the garden. Goners are weak, but they are numerous. Reds are more aggressive, green ones are very agile, yellow ones are better protected.
Picassos and Torks are unreal and almost harmless.
Unexpected, fast and aggressive Kilrois. Venuses are smart, often act on a pair, are strong in attacks. The Davids are completely unpredictable, they follow well thought out tactics.

First, destroy the weakest boss - Medusa in the pyramid. It is enough to find the special weapons "changing" and "boomerang". After reaching the center of the pyramid, you will see that the Medusa is in a square with a narrow passage and a blue cable inside. Shooting in Medusa from the "changing", you find yourself inside the square, and Medusa - beyond. Now, standing at the entrance, shoot from the "boomerang" and recharge.
Fighting with most other bosses, use "annoballs" and shoot from any powerful weapon while defending. "Annoballs" are very important, because, adding ammo, you can shoot longer.
But on the Balkan (Balkan - in a desert area in the north-east) with such tactics you will not go. You immediately fall into the ground, where the battle will take place. The Balkans begins to double. Try to entice one double from the general group and destroy it away from it. Do so until the opponents are left only two. Now you need to grab the blue cable, choose the most powerful weapon (except for "nukea" and "heh") and, without giving monsters the slightest chance of rapprochement, interrupt them.
On the western shore of the lake, where Silva will begin to Dictate you, turn the weapon to the fountain and shoot straight into it. Ricochet - and your stock will increase by one.
Controlling electricity Tesla is very dodgy. Flying in the south-west "The Fly" is capable of destroying you with a piercing sound. Riberto in the circle of death consists of a wire-spiral. You can go through a spiral when Riberto unwinds. Beware of Chameleon in the estate: it can become invisible.
With the old witch Loki in the stadium, you can successfully fight only if there is a "nukea": the witch can not stand the third exact hit. However, this weapon spends your life energy (not to mention ammunition), so using "nukea" should be very circumspect.
In the final match with the Super Brain, move more. try to shoot accurately and fully use the "nukea". Always use the defense. It is enough four exact hits, but to make them it is very difficult, since. The enemy moves unusually fast.

Press during the game R, R, L, A, C, B,=>, <=, L. Then press and hold X. In the upper left corner of the screen, an image of the open door should appear.
While holding down button A at the same time as X, the ability to defend is increased (yellow bar);
B - increases the ability to attack
(red strip);
C - speed (green bar);
X + L - "inclusion" invulnerability (in the upper left corner will be a red shield with the letter "S");
X + R - increase your "rank".
‹
›
Home
View web version