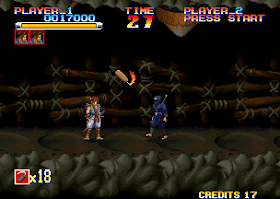 Genre: Action
Perspective: 3rd-person, Side view
Gameplay: Platform
Published by: SNK of America
Developed by: Visco Corporation
Released: 1999
Platform: Neo-Geo
Musashi Ganryuki, known outside of Japan as Ganryu, is a platform videogame and Hack & Slash (short and slit) developed by Visco and published by SNK in 1999 for the Neo Geo.3 arcade board. It is based, loosely, on the fight of Miyamoto Musashi against Sasaki Kojirō. Sasaki, a samurai known as Sasaki Ganryū, names the base name and best known video game.

The selectable characters that we find in the video game are Samurai Miyamoto Musashi and his female counterpart, and kunoichi, Suzume.
The mission of the game is to rescue Musashi's love, Otsu, from an evil clan of ninjas led by Kojiro Sasaki.

Players are armed with a sword (katana for Musashi / kaiken for Suzume) and a grip paw.5 The paw serves as a long-range weapon, and can be used as an anchor in strategic locations to reach higher ground. or ascend over abysses. A powerful projectile attack can also be made by holding down the attack button, although this entails a loading time and leaves the player exposed to enemy attack.

Throughout the adventure you can find various additional weapons, and temporary, such as shurikens (used by Musashi), kunais (used by Suzume), and a mystical weapon that is shown to us as an "energy ball".
When rescuing hostages, the player can receive various rewards such as:
Food (onigiri, takoyaki), which will restore our health.
Coins (ryō), to receive extra points.

April 14, 1612, Musashi Miyamoto and Sasaki Kojirō fight in a duel. Musashi had the opportunity to see Kojiro's sword sometime before the duel and so he knew of his great length, seeing this, Musashi made his sword even longer. When Musashi reached the beach for the duel ... A long-awaited battle began. In the fight, Musashi, avoided a low attack of Kojiro jumping, reaching to reach more than one meter in height to fall, hitting at that moment, the head of Kojiro with his heavy wooden sword. Kojiro, in such a way, fell agonizing on the sand, mortally wounded, and Musashi left without killing him. Some critics of Musashi said he was a coward for not killing Kojiro, but Musashi was pleased to have defeated him; It was not necessary to kill anyone.
A year later, Musashi and his lifelong love, Otsu, plan to meet in Kyoto with the intention of eloping. Otsu is accompanied by her younger sister, Suzume, a kunoichi from the Iga clan. During this time, a series of mysterious kidnappings are happening in the city of Kyoto, all at the hands of a sinister ninja clan. Before Musashi arrives, which is undoubtedly the most important event of her life, Otsu is kidnapped while Suzume is momentarily gone. Musashi and Suzume, shocked by what happened, form a team to carry out Otsu's rescue; either they do it themselves or, directly, they can give it for lost.
As soon as their adventure begins they both face fierce battle against numerous ninja as well as terrible monsters, and find the origin of all the kidnappings: Sasaki Kojiro, who had risen in cruel last desire of revenge against Musashi. Kojiro, imbued with pure rage and evil, has been reincarnated in the demigod of evil, Chaos. In such a way, with a power beyond what he dreamed of in his hands, he challenges Musashi and Suzume to join him in Ganryujima, where everything is ready to begin their final confrontation.
Realizing that their strength comes from their mutual love for Otsu, Musashi and Suzume fight against Chaos and finally manage to destroy him once and for all. After their victory, Musashi and Suzume meet Otsu. Musashi and Otsu, finally together after such an arduous fight, get married, and Suzume assumes the role of her sister in the Iga clan as a priestess.

The era to which the video game transports us, the years 1612-13, were really convulsive times in real world Japan.
The country was in full interwar period and the situation would not really calm until 1615, when the Tokugawa army besieged Osaka and finally destroyed the Toyotomi fortress.
‹
›
Home
View web version