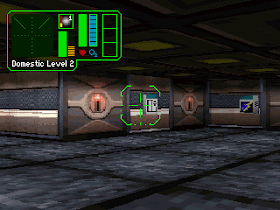 Genre: Action, Strategy / Tactics, FPS
Perspective: 1st-person
Setting: Cyberpunk / Dark Sci-Fi, Sci-Fi / Futuristic
Published by: Multisoft Co.
Developed by: Millennium Interactive Ltd.
Released: 1996
Platforms: 3DO Interactive Multiplayer, DOS
We've already seen enough games about our probable future, here's the next one. 2204 year. Your boss Shelford Pizz is dead, and you, as a Tyron Corporation engineer, should continue his work on installing and testing security software. All would go well if the Corporation did not decide that they are ready to transfer the security systems to automatic mode.Your task is to survive in the mining colony MRP-6F, collect the equipment necessary for the space shuttle departure, learn the security codes for accessing the droid system and launch the self-destruct mechanism. Make all this necessary until the moment when Defcon 1 (the state of maximum combat readiness) has come. Along the way, you will have to face the aliens who suddenly flooded the colony.The musical accompaniment is intriguing, from the inside the structure is very real, but the controls are a little lame.Also, the game was released on the platforms DOS, PlayStation, SEGA Saturn.

To find the control device (PAD) by the robot, while in the "Control Room" in the upper right corner, step to the right. Leaving the complex, in the "Control Room" you need to start a self-destruct device. You will find it at the seventh level of the Administration.
You will find the tracking devices of the fighters in the places where the ships were shot down. Sometimes devices can be found at such points (they are marked in green) after the third attack.
Security devices are available in yellow points.
Control device "shuttle" look for in the first point of the crash (white mark).
The program management device is on the sixth level of the Administration, right after the door in the Control Room.
There are also three types of secret devices: for controlling fighters (droids), for carrying out explosions and for setting up software.
Berserkers need air to live. By blocking the arrival of fresh air, you doom them to death.
LIMO stations allow you to move around the complex. With a significant destruction of the complex, LIMO can fail.
Before leaving the complex permanently, install a self-destructor in the Control Room.
The radar will help you see all the life around. You have five different types of weapons. The strongest is blue. Keep the air clean. Killing, invaders and your robots spoil it. The operating system VOS (Virtual Operating System) is a computer program operating on the planet MRP-6F and ensuring its safety.
‹
›
Home
View web version