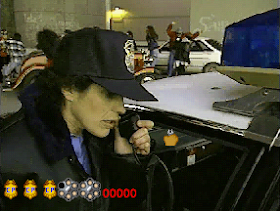 Genre: Action
Perspective: 1st-person
Art: Full Motion Video (FMV), Live action
Gameplay: Arcade, Rail Shooter
Published by: American Laser Games
Developed by: American Laser Games
Released: 1994
Platforms: 3DO Interactive Multiplayer, DOS, SEGA CD / Mega-CD
Crime Patrol - an excellent shooter! Without any difficulty, you can immediately recall other games by American Laser Games, which are actively using FMV technology, such as "Mad Dog McCree", "Space Pirates" or "Who Shot Johnny Rock?". So, Crime Patrol is better! Natural actions look very cool, sound effects and music only strengthen the effect of presence. Your task is to shoot armed robbers, members of gangs, big bosses and car thieves, not to mention the sellers of drugs and other small maniacs. Starting with the level of rookie, you are trying hard to break your way from level to level - Undercover, Detective, SWAT team and, finally, Delta Force, something type of our "Alpha". Watch out for innocent residents of the city - by shooting them, you will immediately finish your career.
In 1993, American Laser Games released another arcade game on laser discs. Later Crime Patrol is ported to the following platforms: 3DO, CD-i, DOS, SEGA CD, Windows, DVD.
Each of these games is made clearly on the patterns of American television series of the late 80's - early 90's. If Crime Patrol sported police motives, then Who Shot Johnny Rock? - this is a detective story, with the murder of a rock singer. Space Pirates offer to put things in order in the alyapovato-ridiculous space as a star ranger, and The Last Bounty Hunter is a classic pirate theme. In turn, Mad Dog and Crime Patrol in the sequels remained true to the genre, only undermining the story under certain topics (western and police action, respectively).

A or R is the fire
clamped B - accelerates cursor movement twice
clamped C - accelerates the movement of the cursor four times
X - call the main menu
The weapon shoots while the cartridges remain in the drum shown at the bottom of the screen. When the weapon is discharged, lower the cursor down-the weapon will turn to the ground. Now press A or R, and both reels will be recharged.