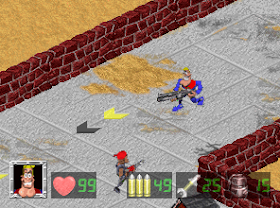 Genre: Action
Visual: Isometric
Gameplay: Shooter
Setting: Sci-Fi / Futuristic
Published by: 3DO Company
Developed by: Cyclone Studios
Released: 1996
Platform: 3DO Interactive Multiplayer
Captain Quazar is a very fun and dynamic fantastic arcade game. In which we will manage the space policeman - Captain Quasar. The chief of police will entrust us with various tasks, we will have to stop the three main criminals of the criminal world of the cosmos, who terrorize it, and at the same time punish crowds of petty thieves, crooks, etc. Which will interfere with the task. Our task is the same, it will destroy something on the map. In this we will help a large arsenal of very different weapons. From a conventional machine gun, to grenades and rockets. What's nice, you can destroy almost everything on the map, erasing it from the face of the planet on which we landed for the task. Do not forget to collect various bonuses. This is another very fun game for the Panasonic 3DO gaming console made by Cyclone Studios, which should not be missed. Later in 1997, the game was ported to Windows 95 PC.

A - shooting from an automaton or a special weapon;
A, A - simultaneous shooting in three directions;
B - rockets and rays;
C - grenades;
L + ⇦ / ⇨ - rotations (possible with simultaneous pressing A);
X - information screen;
P - pause, the ability to change weapons;
A - map.

Yellow and black arrows help find missiles. Supergranites destroy multiple-use missiles before launching them.
In the desert you can find oases with palm and water. There you will restore health.
In the box behind the teleporter "BBVVVVVV" hidden super weapons. and to the north of "CCCCCCC" - a health resource.
Near the teleporter "VVAAAAVV" look for a secret warehouse. Near the walls of "VASASAVA" are scattered invisible sacks of money. To the north-east of the door "VAVAAVVA" look for power units. Health and bullets you find to the southeast of the door, near the "AVSVSSAV" will find five missiles.
To get to the plant producing the spice, you need to destroy the gate next to the teleporter "CCCCBCSWB". Then through the gate, go to the right.
Destroy the gate in front of the blue tank in the northwestern corner of the plant, go around the tank and walk the corridor to the southeast. There you will find life. Then go to the northeastern part of the plant to a narrow corridor made up of a gate. In the corridor you can find health and additional lives. The center of the plant is on the southern end of narrow corridors, it is guarded by an invisible guard.
Just north of the entrance to the second plant ("SSABACBC") is an orbiter. In the southeast corner of the plant, find additional life.

Do not destroy buildings on which locks hang. There are captives to be freed. To color locks it is necessary to pick up keys of the same color. You will find them, destroying the enemies and their objects. Scattered pumping plants everywhere, too, destroy.
Inside the electronol in the south are hidden a green key, bullets, grenades, rockets.
In the diamond-rich neighborhood of the teleporter "SSVSSASS" can only be accessed with his help.
The teleporter "AVAVVAVA" is located in the north. There is a supergranata hidden in the box. To the east of this place is the entrance to the spice mines. To complete the stage, it is necessary to enter the password "ВВААВВАА" in the elevator.

This stage is an interlacing of moves in the mine. The walls here can not be blown up. Get enough missiles immediately. Shooting at enemies, try not to break the light bulbs. To complete the stage, you need to go through several force fields and collect a few supergranats. Mining mechanisms are protected; use supergranates.
To get to the secret section of the mine, use the teleportator "AASVSAVV" in the southern part of the stage.
The lift to the Doobah is located in the northeast. He is well guarded. To the left is life hidden. At the lift, enter the password "SSVVVVAA".

Here, Quasar will have to destroy the armored tank "Doobah". It will take some supergranat. Full health is hidden in a box in the northeast, speed is in the south. Shield will find in the west. After destroying the wall and out into the desert, behind the three large stones find supergranates.

In the fifth stage you will find islands, seas, and poisonous grass. The items are hidden in green pods and in blue.
Agile water monsters destroy grenades, counting where they will be at the moment of landing of the rocket. Water with bubbles will explode when Quasar thrusts into it. Pre-throw a grenade there.
Red areas on land are poisonous. The quasar here is green and is waning. But the blue flowers are safe and even useful.
Your first mission here is to save the hostages held in small houses. First, clear the road from the hut to the teleporter, then free the poor fellow and take him to the teleporter.
Secondly, you need to find a few "relics". Some are hidden on islands, to which you can only get by swimming.
To the ski lift in the Zang's lair (Zang's lair), pick up only after the "relics" are collected in the released hostages. The password is simple - "SSSSSSSS".

Quasar operates on four floors of an underground factory. The floors are connected by elevators, which are locked with colored keys. If the floor on the map behind the wall is red, then this wall can be destroyed by Quasar. And nothing will come of purple. Try not to hit the bulbs.
The red key on the first floor is located at the end of a short impasse in the east. Red lift (to the second floor) look for in the south.
The blue elevator (to the third floor) is located behind the wall in the northeast, next to the secret area.
The cache with crystals is located behind the wall in the south-eastern part of the floor. Another secret room (opened with a blue key) is around the corner in the west. From here you can go to the green lift.
On the second floor, a red lift (going to the first floor) is installed in the south. The blue lift (to the third floor) is located to the north and east of the red lift.
Southeast of the square area with many objects, in the center of this floor, there is a small room with extra life. The big secret area is located north of the small one. Go to the eastern end of the room to destroy the transmitters of the enemy.
Mechanisms on the third floor must be destroyed. The yellow elevator to the fourth floor is located behind the wall at the western end of the floor. The key to it is in the north-west corner.
The blue elevator (to the second floor) is located in the north-western part of the floor. Next to it is a red elevator that takes you down to the first floor.
In the western corner of the fourth floor there is a yellow lift. Go south from the yellow elevator to find the transmitter. Another transmitter is located in the east. Search for the black key to the southwest of the transmitter. Behind the wall near the black key is a hiding place with a red elevator and all sorts of things.
To complete the stage, go to the black lift in the south of this floor.

Here, two gun turrets wandered, driven by Zang from the fortress in the southern part of the stage.
Travel to the south and east and take the blue joystick - it will allow your captain to control one of the guns. Now attack the second gun and force Zanga to capitulate.

The stage consists of several areas connected by platforms. Before the start, buy shields, health, ice guns.
Red areas slowly destroy the Quasar, the walls of the flame - instantly. You do not look like lava too long. Use shields to penetrate areas blocked by fire. Do not forget, in order to save, to remove shields when they are not needed.
Radar installations destroy immediately, as you notice. Grenades use to kill enemies in yellow.
Destroying as many boxes and objects of the enemy, you increase your power. Additional shields can be purchased at a store in the west.
After destroying all the bombs, go to the northwest and jump on the floating platforms. In the middle of the southern region is the computer terminal. Enter any password.

The stage consists of three areas: a center with four teleporters, a large main area and Oaks Palace. It is required to destroy all chests, buildings and statues, find keys and other items.
The teleporter in the north-west leads to Oksa Palace, and the other three to the main area.
One of the black keys needed to enter the palace is hidden in the center of the north-eastern garden area.
The last gate of the palace allows you to go to the big black section. There you go to the north - you will find "continuation". Destroy the building in the southeast part of this area to finish the stage.

Stock up with missiles and shields. Your only task at the final stage of the game is to destroy the Oks ship.
Dodge asteroids and black holes, try not to lose sight of the ship. Shoot him from behind, then he will not be able to place shields. The game will end when you destroy the ship.