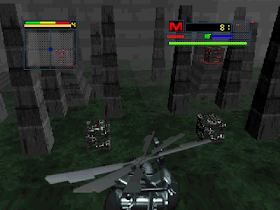 Genre: Action
Perspective: 3rd-person
Gameplay: Shooter
Setting: Sci-Fi / Futuristic
Published by: 3DO Company
Developed by: Studio 3DO
Released: 1995
Platform: 3DO Interactive Multiplayer
The game Blade Force for 3DO Interactive Multiplayer is a 3D game with quite large locations. The game takes place in the future in 2110, where the new city of Meggagrid was formed on the site of the former city of Los Angeles. It has become so filled with various criminals and monsters that simple police with them already simply can not cope. And then comes to the rescue a hero in a special suit with a Helipak Flight Suit propeller, do not associate with Carlson. We will be entrusted with various tasks by the professor. We will have to deal not with petty criminals, they will be coped with by the police, but to destroy the heads of gangs will fight with a criminal gang known as The Pitt Family. To deal with the descendants of the Gorgon's jellyfish, the arsonist, the mutant surgeon, the aligarch with his mistress, and so on. In total there are 7 tasks in the game, each of which is divided into 4 zones, and in the end it is necessary to fight with the Boss. The game has a fairly large arsenal of weapons, and improvements to the costume. All this will help us to go through the game. At the beginning of management it seems uncomfortable, but in time you get used to it.
There is a training level commenting on the main objects. The passage of each level takes about an hour. All six levels are divided into four different colored zones.
At the end of every fourth zone, you are waiting for the enemy boss, with whom it is better to fight in the last place, gaining experience and maximally weakening the enemy.
Boxes with vital energy, fuel, protection and weapons lie not only in conspicuous places, but also hidden under the walls and gun turrets of the enemy.

L, B - left and right helicopter A - fire
B - movement of the helicopter forward
C - use of special weapons
PAUSE - switch between the "game" and "pause" modes. In the "pause" mode, you can call up the card (A) or options - the main menu (B), return to the game (PAUSE) or complete it (X).
X - choice of special weapons
The main menu ("MAIN OPTIONS") contains options: - "SELECT CONTROLLER" - here you can redefine the control buttons of the joystick - "SELECT INTERFACE" - here you can determine in which corner the "RADAR" panel (the picture displayed by the radar) in which - "STATUS" (information about the stock you have fuel, health, etc.)
- «SFX - MUSIC BALANCE» - here you choose the ratio of music and technical noise of your flight
- "VIEW HIGH-SCORES" - a demonstration of the names of the winners
- "START NEW GAME" - start a new game. On the next screen you will need to specify your name. Next, a map of the area and symbols are displayed: red boxes strengthen the power of your fire, green serve to strengthen weapons - simplify the attack. Boxes with a red cross add health to you (red status bar), light boxes with the inscription "FUEL" is fuel (blue status bar), and dark ones with yellow lightning are ammunition. To "pick up" the box, just bump into it
- "LOAD SAVED GAME" - load a previously saved game
- "DELETE SAVED GAME" - delete previously saved game